The ever-popular media centre app Kodi is going through another period of iteration, and not long after version 17 was made available for everyone to download, the app is again under heavy development, with version 18 – codenamed Leia – very much in the works.

The folks behind Kodi have today published a new blog post in which they outline some of the new features and changes that will arrive as part of Leia, and if you want to try some of them out right now, you can do so by installing the latest nightly build of Kodi for yourself. 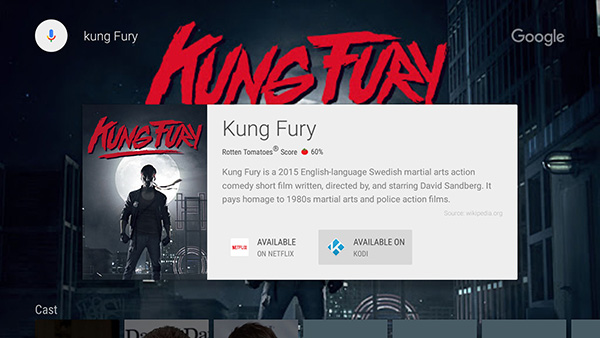 Now the Kodi team did announce some of these new features coming to Android TV few days ago in the form of a video, but today they have explained them in detail in a separate blog post. Focussing on features that will benefit those running Kodi on a device powered by Android TV, Team Kodi’s post shows what the team is working on at the moment. One of those things is better integration with Android TV itself, with support for voice search and library navigation from within the Android TV’s menus.

Finally the time has come that Kodi joins this elite group and will now be able to show [its] library content on the Android interface as well with full voice and search integration. You will get suggested content like unwatched random movies, and episodes to continue binge watching them till the end. For the music enthusiasts we show you random albums from your library to keep your listening as diverse as possible.

Voice search also uses Google’s own system to allow searches to be carried out from the Android TV home screen, meaning finding that latest episode of your favorite TV show is now just a simple sentence away.

Those who are tired of having to use an on-screen keyboard to enter text within Kodi can now also get in on the voice action, because entering text can now be done by simply speaking to your Kodi-powered Android TV in a similar fashion to voice search.

… from now on you can use voice to text typing using the same button on your remote as for the Voice search. To make use of this feature simply do the same as you normally do but instead of typing with the keyboard use the microphone button on the remote and speak.

If these new features sound like something you want to try out, then you can download the latest nightly build from the Kodi downloads page. The new version can be installed over the existing app, meaning you should not need to set everything up again. Just remember folks, this is not finished software, so expect bugs here and there.