Time definitely has a way of getting away from us. It feels like it was only yesterday that Apple was introducing iOS 12 at WWDC 2018. Now, we are only a few weeks away from a public iOS 12 release. To add to that excitement, Mumbai-based developer Umang Raghuvanshi is once again tweeting out absolute fire, this time sharing more information relating to a potential iOS 12 jailbreak.

So, for the sake of clarity, it’s probably worthwhile having a little background context to the situation. Umang is the developer who is responsible for releasing the Libertas tweak that is supposed to prevent popular apps and games from detecting that a device is jailbroken. This was a very welcome addition to the community – especially for those who want to be jailbroken and play games like Fortnite – but it has actually had a few problems in terms of actually blocking that detection. Umang was also responsible for locating a 0day within Apple’s iOS 12 beta release and jailbreaking it back in July.

So, as you can tell, there is a decent level of pedigree here from this developer and enough positive reputation to actually take his revelations seriously. Umang’s latest tweet is extremely cryptic and will probably not mean a great deal to the average device owner.

At this point in time, given the developer’s previous work, as well as the fact that his tweet specifies that this “has been a good month,” we can only ascertain that this latest information is a hash or nonce of some description that is related to his work on an iOS 12 jailbreak. After all, Apple is planning on releasing iOS 12 into the public domain at the end of September, so it would be extremely well-received if someone had a jailbreak ready not long after release. 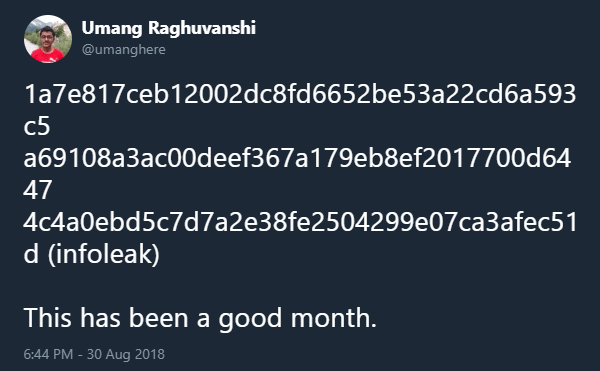 There are some commentators in the jailbreak community who believe that this information is an important part of a PoC that Umang is putting together as part of his iOS 12 toolkit which might also be applicable to iOS 11.4.1. However, until he actually provides more information or some additional context, it’s all up in the air and open to speculation.

For now, we await more information on this topic and hope that the developer manages to find time to update and fix Libertas as part of the package.