iOS 12 Jailbreak: Another 0day Discovered Which Could Likely Be Used In A Future Public Jailbreak

Apple’s iOS 12 beta has been successfully jailbroken. Yes, you read that right. As we wait for the Electra team to release the iOS 11.3.1 jailbreak into the community it’s become common knowledge that a Mumbai-based developer by the name of Umang Raghuvanshi has jailbroken iOS 12.

A lot of jailbreak fans are sitting waiting patiently for CoolStar, @nullriver, et al to finally drop the updated version of Electra in order to liberate iPhone and iPad hardware running iOS 11.2.through iOS 11.3.1.

However, some individuals, who have either gotten sick of waiting or who just prefer to be involved in the cutting-edge side of technology, have already updated and embraced the iOS 12 rollercoaster and will be overjoyed to hear that a relatively young and new-to-the-scene developer has managed to liberate Apple’s latest iOS update.

As you might expect, when a relatively unknown developer pops up in the social stratosphere claiming to have a jailbreak for Apple’s iOS 12 platform, the general consensus is that it is full of “lies” or “scam.” And that’s understandable to a certain degree. However, it seems that this is very much legit, with well-known developers and community figureheads like @nullriver and @Pwn20wnd contributing to the excitement with the confirmation that the developer has indeed achieved tfp0 on iOS 12.

The latter has confirmed that Raghuvanshi has indeed created his own iOS 12 jailbreaks with his own 0day, and @nullriver suggesting that community members consider donating to the developer in order to purchase a physical device for testing as he’s currently using CorrelliumHQ virtualized hardware. 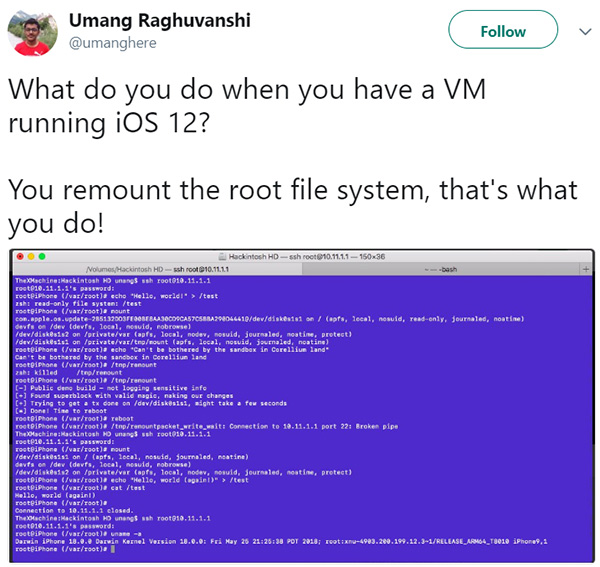 This is all definitely good news as far as jailbreak iOS 12 is concerned and shows that multiple developers are able to find the necessary bugs in Apple’s iOS 12 platform. We already know that the Electra team has had to burn one of those discovered 0day bugs applicable to iOS 12 in order to get the necessary APFS rootfs remount for the iOS 11.3.1 jailbreak.

However, it seems that there are a lot more bugs to go around as far as Apple’s latest platform is concerned. With iOS 12 currently in beta, it’s unlikely that anything will actually be released until the platform launches later this year, but we will be sure to keep you updated with any and all progress.