CoolStar, the developer behind the extremely popular Electra jailbreak, has announced that the most recent 0day bug in Apple File System (APFS) that he has discovered will not be burned with this upcoming jailbreak update for iOS 11.3.1.

As far as bugs are concerned, it seems that APFS is the gift that keeps on giving from a potential jailbreak perspective.

The developer has been active on social media over the last few days to confirm that he has discovered new bugs in APFS – the file system that is now present in Apple’s iOS firmware – and that he could potentially use one of those bugs as part of the Electra iOS 11.3.1 rebuild in order to get passed a few niggles that are causing concern. However, by his own admission, that solution would be a “piece of crap,” which would also burn the aforementioned 0day.

Now, it seems that there has been a change of heart for one reason or another and that the potential of burning the 0day is no longer being considered for iOS 11.3.1. This could be because an alternative solution has been found or simply down to the fact that it just doesn’t make sense to burn through a 0day which could still be a viable bug on Apple’s iOS 12 platform once it goes live for everyone later this year.

In fact, CoolStar has confirmed that the team will “be saving this for iOS 12” and that they live in hope that Apple doesn’t discover the bug and patch it before the final version of iOS 12 is released. 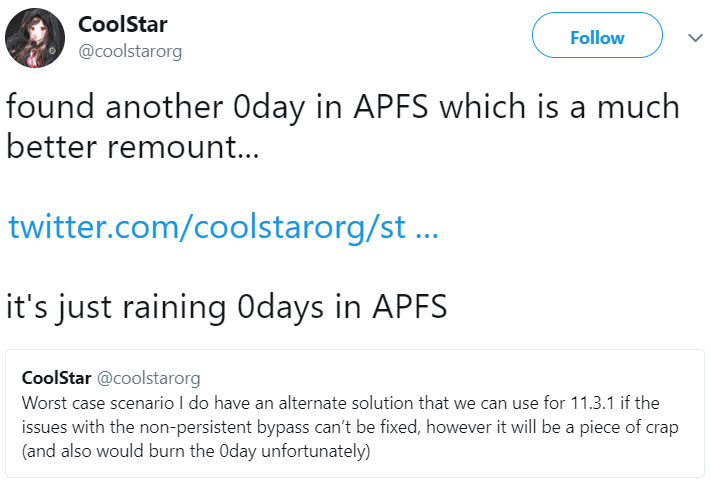 This is good news for a couple of important reasons. First of all, the fact that the team is deciding not to burn the 0day would suggest that it has found an alternative solution to the “non-persistent bypass” problem that was interrupting the progress of Electra1131. It also means that if all goes well, and if Apple doesn’t discover the issue internally, that the first public release of iOS 12 could have a 0day bug in place that would allow a jailbreak to be created almost immediately. It’s been a long time since we had a jailbreak available almost immediately after the release of a new major version of iOS.

As CoolStar states, “it’s just raining 0days in APFS.” Long may that continue.