Cydia Demoed Running On iOS 11.3.1 Jailbreak Ahead Of Electra Release

The team working on the updated Electra jailbreak has once again shared an idea of progress and provided an insight into what’s going on behind the scenes with Electra1131.

This time, the information shared comes courtesy of @nullriver and shows Cydia running on a liberated iOS 11.3.1 platform.

First and foremost, what we have in the screenshots is the Cydia icon on the Home screen of a jailbroken iOS 11.3.1 device surrounded by other popular apps, such as Snapchat, Instagram, and the native and official Twitter app.

The developer has also shared a few screenshots of Cydia up and running on the device – shown as iPhone 10,6, or iPhone X – as well as the string of text at the bottom of the Cydia interface which shows that the device is running iOS 11.3.1 and the 64-bit version of Cydia with version number 1.1.30.

The imagery of the same version of Cydia running on the 2017 10.5-inch iPad Pro has also been shared, this time showing the Settings app loaded with a host of jailbreak apps and tweaks. 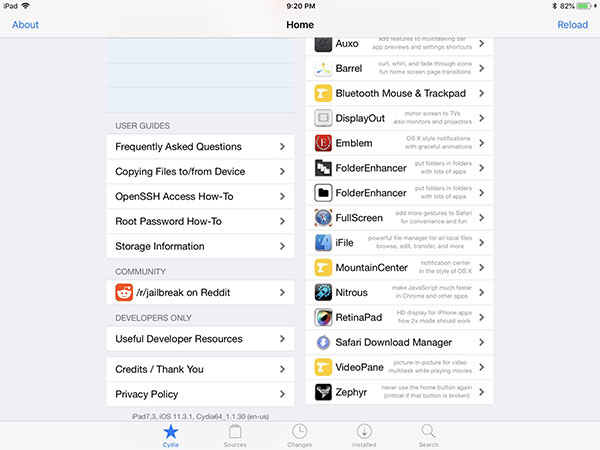 Additionally, a secondary member of the Electra team – @Pwn20wnd – has also jumped in on the action and confirmed that the new Electra1131 tool will offer a feature whereby a user can revert back to a non-jailbroken state with a simple tap of a button within the new Electra app.

This is intended to ensure that a user can bypass jailbreak detection that exists within many popular apps, such as Snapchat, banking apps or the hugely popular Fortnite game. Rather than being prevented from running those apps or games, a simple revert to stock feature would allow a device owner to switch between the two states with relative ease.

The team has also shared information which suggests that a release could be closer than a lot of people would have initially thought. The aforementioned @Pwn20wnd has suggested that the UI of Electra1131 is “99%” done with the focus now being placed on trying to make everything as a simple as a single tap within the app in order to promote an excellent user experience.

CoolStar has also chimed in to confirm that, this time around, there will be no public or developer-facing beta release of Electra1131. When it’s released, it will be released to the community for public use. Plain and simple.

As always, as soon as additional information becomes public knowledge, we will be sure to let you know.