iPhone 7 To Come In Five Colors, With Fifth Being ‘Gloss Black’ Option [Rumor]

Now that Apple has officially confirmed that a dedicated iPhone 7 event will take place this coming September 7, the race is on for publications and serial analysts to get all of their predictions out of the way prior to that happening.

Of course, as we have seen historically, that also includes a number of visual leaks, with the latest photo leak claiming that Apple will offer the new iPhone 7 range with a new glossy black exterior aesthetic, similar to the finish on the company’s Mac Pro that hit the market back in 2013.

The majority of speculation pertaining to the iPhone 7 over the last few months has focused on the underlying technical specification of the device as well as the overarching physical design. Running alongside that speculation has been a recurring suggestion that Apple will look to appeal to a wider consumer base who want variety and choice, by introducing a new device finish that would deviate away from the usual Space Gray, Rose Gold, Silver, and Gold options. According to the latest image shared, which shows five individual SIM-card trays side-by-side, the source believes that the new finish will be a glossy black option, and will be adding to the already available range of colors, and not replacing the Space Gray option.

There have been scores of suggestions earlier which pointed at Apple making the decision to move away from the ongoing Space Gray finish in favor of a darker, almost black option, like the Space Black on the Apple Watch.

If this latest leak turns out to be accurate, then judging by the shared image we could be in line to receive not only an iPhone 7 with an even deeper black finish then Space Black, but one with an overall glossy finish, contrary to the matte finishing currently found on the iPhone 6 and iPhone 6s range. We can only hope that it doesn’t look or feel like the plastic rear that used to ship with the iPhone 3G and iPhone 3GS. 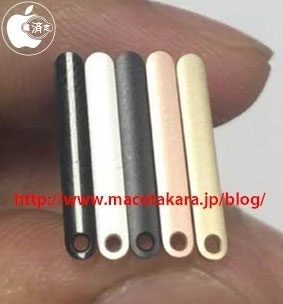 In addition to this new external finish, Apple is now expected to introduce an iPhone 7 that ships without the iconic 3.5mm headphone port, a new A10 CPU and accompanying M10 motion coprocessor, a larger camera sensor on the 4.7-inch iPhone 7, and a dual-lens camera system and Smart Connector on the larger 5.5-inch iPhone 7 Plus, among other things.