When Apple announces the iPhone 7 in a couple of months, rumors claim that a new black version of the hardware will be available. As fans of the slate/black iPhone 5 will attest, there’s nothing better than a stealth iPhone when it comes to looking awesome, so the thought of an iPhone 7 following the same path has us intrigued.

As it turns out, it has designer Martin Hajek intrigued too, because he has created a fresh batch of renders that not only show a Space Black iPhone 7, but also a device with a flush, touch-sensitive Home button for those that hope Apple will bring such a thing to fruition this year. 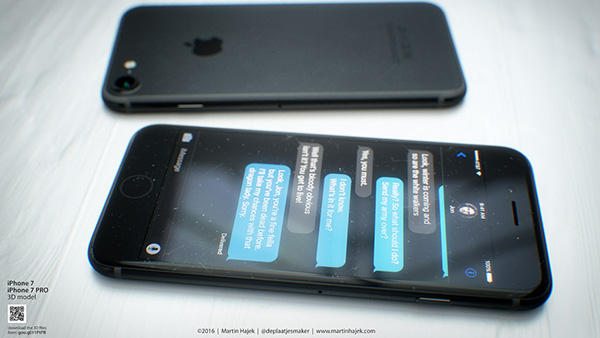 As if that wasn’t enough, the renders also depict what everyone on the internet is talking about right now – Lightning-based EarPods.

Apple is rumored to be getting ready to ditch the headphone port in favor of a thinner body that would require users either connect their earphones via Bluetooth, or plump for something with a Lightning connector. There will likely be adapters that can be bought to allow legacy earphones to be used, but Apple is expected to ship a Lightning connector-quipped pack of EarPods in the box so users have something to use on day one. The render includes a pair of black EarPods, presumably to match the black iPhone we are spending so much time lusting over.

Here’s what Lightning EarPods may look like Space Black finish: 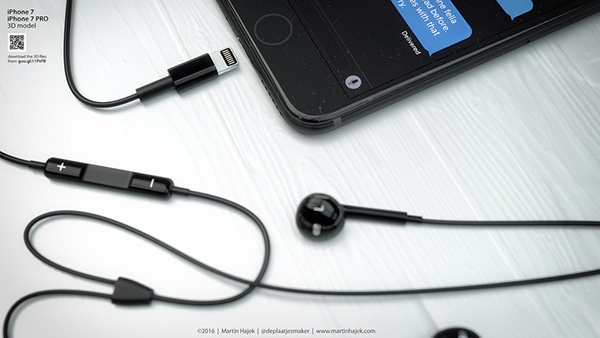 As for that Home button, Hajek’s concept depicts a flush button that is actually a capacitive button rather than a physical one. That could theoretically allow for a thinner iPhone – something Apple seems determined to achieve if the rumors are to be believed.

Whatever Apple announces in September, if it looks anything like these renders, then we are in. We’ll have a 256GB Space Black iPhone 7 please, Mr Apple Store Employee.