Every year as part of the build up to the official next-generation iPhone announcement, we witness the same sequence of events play out. There are always multiple visual and informational leaks that allegedly come directly from Apple’s supply chain partners. There are also analysts, publications and industry experts making predictions, ranging from the believable to the bizarre.

In that true fashion, we came across a suggestion that the iPhone 7 will be offered in a new Deep Blue finish. That claim has now been retracted and it is instead being suggested that Apple could be about to change the existing Space Gray for something a little darker.

The news which leaked courtesy of a Japanese publication, suggested that the next-generation iPhone 7 will have a Deep Blue color option which would replace Space Gray. And now, the same publication is joining a number of other sources in suggesting that Apple has plans to introduce an iPhone 7 model with an exterior finish similar to the Space Black Apple Watch.

Rather than add it as a brand new line in the range, it’s being suggested that the company will modernize the existing Space Gray finish by making it a lot darker and market it as ‘Space Black’, or a “formal black”:

I have heard another information that space grey would not be disconnected, but would be possibly updated to much darker color. Also, the new color would not be Deep Blue, but possibly formal black which is close to black. 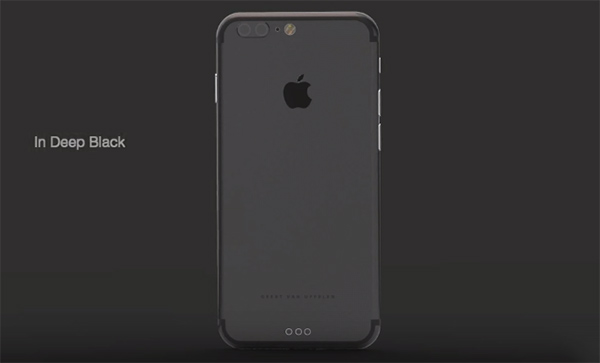 (Image: New Video Shows What iPhone 7 Could Look Like Based On Latest Rumors)

It may not necessarily seem like a huge change to simply tweak a color here and there, but if you generally always purchase a Space Gray iPhone on an annual basis, the move across to a more standard black exterior could really throw some consumers off their game. Interestingly, it’s not just the color of the iPhone that’s garnering attention.

9to5Mac is reporting that sources claim that Apple is “working on its own fully wireless EarPods“, a claim which, if true, would well and truly put the writing on the wall for the iconic 3.5mm headphone jack. Meanwhile, the Home/Touch ID button on the iPhone 7 is being reported to stay mechanical and not pressure sensitive, but will employ haptic feedback to simulate a click.

More sketchy news include the appearance of an Apple Watch 2 which will pack its own GPS chip, with Workouts app being able to track swimming as well, which could mean improved waterproofing for the wearable. There’s also noise regarding the next-gen MacBook Pro which will not only arrive with an OLED touch bar at the top, but a Touch ID sensor as well embedded into the power button.

Of course, all of this is purely conjecture at this stage, with the publication noting that these sources come with no previous history of success. As for the more pressing concern of the iPhone 7 color, given the fact that the Apple Watch is currently offered in a deep black color that is ‘Space Black’, it certainly isn’t beyond the realms of possibility that the next-generation iPhone could introduce that style as well.