Is This What Apple’s Lightning-Enabled EarPods For iPhone 7 Will Look Like? [Leaked Photos]

Apple’s next-generation iPhone, which will likely be called the iPhone 7, is due for a release this coming September, and is widely expected to ship without the inclusion of a 3.5mm headphone jack for the first time in the iPhone’s history.

Speculation about the potential exclusion has been steadily gathering traction over the last few months, leaving us all to wonder what Apple will do about the existing EarPod accessory that relies on the 3.5mm connection for audio transmission. Speculation is mounting that Apple will provide a product similar to what is already offered, but with a connection that makes use of the the Lightning port on the iPhone.

A new image found on a Chinese website shows off exactly what the accessory could look like, by giving us a look at a set of very familiar looking EarPods with a Lightning connector on the end in place of the standard headphone connector that is shipped with the current EarPods.

The images are definitely worth viewing with an open mind and taking what is shown with a grain of salt. It’s highly unlikely that these represent an official Apple product, but they do give a fairly good idea of what a Lightning-enabled set of EarPods could potentially look like.

The keen-eyed readers will instantly be able to see that the Lightning plug immediately looks out of place in comparison to the rest of the accessory, suggesting that it most definitely is not representative of an Apple manufactured accessory. 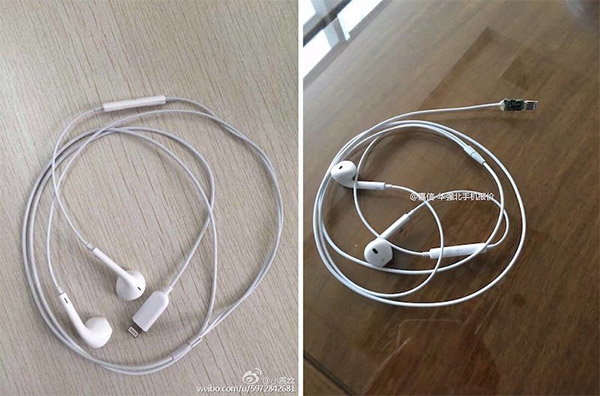 The Lightning plug also appears to be thicker and much larger than the adapters that are currently offered with certain Apple products. There’s just no way the Cupertino-based company would regress in this manner and ship a product of this nature that looks unsightly compared to what is already offered, but a slightly thicker plug wouldn’t be surprising given the additional circuits and chips that will be needed to serve charging/sync, plus audio functions.

Rumors about the possible removal of the 3.5mm headphone jack have been circulating since late 2015 and show no sign of dispersing anytime soon. Apple could either ship a set of Lightning-enabled headphones, a wireless Bluetooth offering, or a standard set of headphones with a Lightning to 3.5mm audio adapter in the box. Only time will tell which option Apple goes for.