As is often the case at this time of the year, the next-generation iPhone, or the iPhone 7 as it is being referred to, is the hot topic of conversation in the consumer technology world. Apple is widely expected to announce the new iPhone this coming September 7th at a dedicated press event, with sales of the device likely to come shortly after that.

As we already know, there shouldn’t be any major surprises when it comes to the overall design of the device. Thanks to various image and video leaks, we already have an idea of what to expect from the release, as well as the fact that Apple has moved to a tick-tick-tock release pattern, meaning that it will actually be the 2017 iPhone which will be the big hitter. 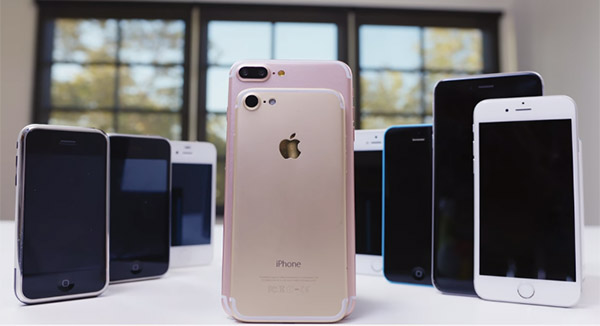 2017 aside, let’s focus on here and now, and exactly what Apple will introduce with this year’s iPhone. YouTuber Austin Evans has managed to get his hands on iPhone 7 and 7 Plus dummy units, and rather than simply showing them off, Evans has decided to go one step further and feature the iPhone 7 Plus dummy unit against every other iPhone Apple has ever made since 2007.

It’s extremely interesting to have a look at the iPhone 7 Plus mockup in the hands of an actual person, rather than seeing components and parts of it teased in still images or short clips. You can immediately see the elegance of the pill-shaped camera design that will showcase the dual-lens camera setup and will be a major differentiator between this larger Plus device and the smaller iPhone 7.

There may be a ton of users who are sad to see the 3.5mm headphone jack removed from the device, but the introduction of a second speaker grille in its place brings uniformity and a sense of beautiful symmetry to the bottom of the phone.

It’s actually really interesting to take a wander down memory lane as well with this video, and to see how far the iPhone has progressed since 2007. There’s no doubt that this year’s iPhone will be the most beautiful, powerful device from Apple yet, but the foundation that has been put in place with every iPhone to date has made that possible.