As you might already know, Pangu has a jailbreak available for 64-bit devices running iOS 9.2-9.3.3. That particular jailbreak may have come somewhat out of the blue when it was released to the public, but it has subsequently benefited from a number of updates that have introduced not only support for English speakers, but also a more streamlined process that makes the jailbreak a lot more useable to the average iOS device owner. 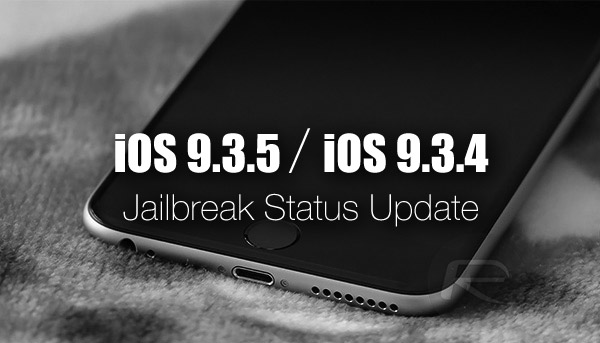 Of course, we’ve also seen a number of popular packages updated for iOS 9.3.3, as well as Cydia itself benefiting from an upgrade.

The launch of iOS 9.3.4 by Apple may have been sudden, coming just two weeks after the public release of iOS 9.3.3, but the sudden nature of the release is also tinged with disappointment for jailbreakers. iOS 9.3.4 is basically a firmware release that focuses predominantly on security fixes, and as such, essentially patches the vulnerabilities within the platform that were used by Pangu Team to offer a jailbreak on iOS 9.2-9.3.3. In short, at this moment in time, no current public jailbreak solution can be used to liberate iOS 9.3.4 (or even iOS 9.3.5 which Apple released three weeks after jailbreak-patching iOS 9.3.4) from Apple’s walled garden.

According to Apple’s security document for iOS 9.3.4 release:

And for iOS 9.3.5, which happens to patch serious security vulnerabilities in previous versions of iOS:

An application may be able to disclose kernel memory. A validation issue was addressed through improved input sanitization. (CVE-2016-4655: Citizen Lab and Lookout)

An application may be able to execute arbitrary code with kernel privileges. A memory corruption issue was addressed through improved memory handling. (CVE-2016-4656: Citizen Lab and Lookout)

With that in mind, the advice at this time is extremely simple and straightforward; if you care about your jailbreak, or if you have aspirations to jailbreak your iPhone, iPad or iPod touch using the latest Pangu tool, then simply stay well away from Apple’s latest iOS 9.3.4 and iOS 9.3.5 firmware updates. If you don’t jailbreak though, updating to the latest firmware is advisable for security purposes.

It’s highly likely that the Chinese team behind the iOS 9.3.3 jailbreak solution are already tinkering with iOS 9.3.4/iOS 9.3.5 to see exactly what has changed and if there are any new vulnerabilities to be found that could be useful for a jailbreak, but history has shown us that any release is unlikely to come instantly, if at all.

Apple will launch iOS 10 on September 13th ahead of iPhone 7 and iPhone 7 Plus getting shipped. If Pangu and other teams working on jailbreak solutions have anything up their sleeves from an iOS 10 perspective, it’s likely that the next public jailbreak release could focus purely on that platform. As always, if any developments are made, or if anything changes, we will keep you updated.

Update x1: iOS 9.3.4 has been successfully jailbroken by Italian developer Luca Tedesco. More on it here: iOS 9.3.4 Jailbreak On iPhone 6s Teased By A Developer.

Update x5: iOS 9.3.4 is no longer being signed which obviously means you can no longer downgrade to the said firmware.