Downgrade iOS 9.3.4 To iOS 9.3.3 And Jailbreak While Apple Is Still Signing The Firmware

Apple has thrown a curve ball into the field by releasing iOS 9.3.4 without so much as a single pre-release seed in sight. Only a few weeks after issuing iOS 9.3.3 to the public, which followed on from a number of beta seeds, iOS 9.3.4 is currently filtering its way through the network to iPhone, iPad and iPod touch devices around the world.

As always, if you’ve upgraded to the latest version, either inadvertently or on purpose, and aren’t happy with that decision, you can still rollback to iOS 9.3.3 while Apple is still signing the older firmware. 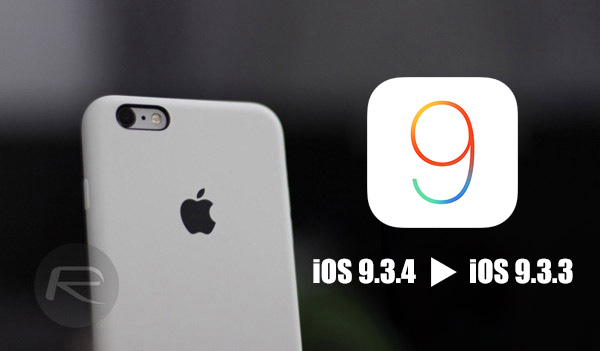 The fact that a rollback to iOS 9.3.3 is still available is wonderful news for anyone who may have instantly regretted the decision to upgrade to iOS 9.3.4. First and foremost, given the fact that iOS 9.3.4 seems to be nothing more than a security update that patches the vulnerabilities used to inject the latest jailbreak payload by Pangu Team, it’s unlikely that it will actually have a detrimental effect on device performance, such as scrolling content or battery life. However, if you have been through the upgrade process, and have noticed an immediate degrading in performance, then you can take solace in the fact that iOS 9.3.3 is still an option.

Of course, the very big factor to consider here is the existence of a working jailbreak solution for iOS 9.3.3. Any device owners who may have been overcome with excitement and upgraded to iOS 9.3.4 without actually engaging common sense, and who are interested in a jailbreak, will have no luck in that sense with iOS 9.3.4 now that we know that Apple has patched the vulnerabilities within the platform.

Until we hear otherwise from the jailbreak teams or a figurehead in the community, iOS 9.2-9.3.3 are the latest firmware versions to be able to be successfully liberated from Apple’s draconian grasp.

So with that in mind, rolling back to iOS 9.3.3 while it’s still being digitally signed by Apple could not only solve any performance issues that may have been introduced with iOS 9.3.4, but will also guarantee that the device can be jailbroken. As long as it’s one of Apple’s 64-bit pieces of kit, of course. If you’ve taken all of those things into consideration, make sure you grab the relevant iOS 9.3.3 IPSW for iPhone and iPad from here: Download iOS 9.3.3 IPSW For iPhone And iPad [Final Version], and then follow instructions from Step 2 to Step 6 in our previous guide here, using iOS 9.3.3 where needed.

It’s important to note that the signing window of iOS 9.3.3 will be closed soon. And once it’s closed, you won’t be able to downgrade from iOS 9.3.4 to iOS 9.3.3 on any device. We will of course let you know whenever that happens. In the meantime, downgrade to iOS 9.3.3 while you still can!