Final version of iOS 9.3.3 download links (IPSW files) are now live and available for all compatible iPhone, iPad and iPod touch devices. This release may pale in comparison to everything that has been announced during this year’s WWDC, but Apple has made iOS 9.3.3 available now as a stable release before the major iOS 10 release which is scheduled for public availability this fall.

Those with a compatible piece of hardware are now able to download the firmware manually and restore to the device via iTunes, or alternatively, can progress through an easy over-the-air (OTA) update method to get up and running with the latest publicly available version of Apple’s mobile OS. 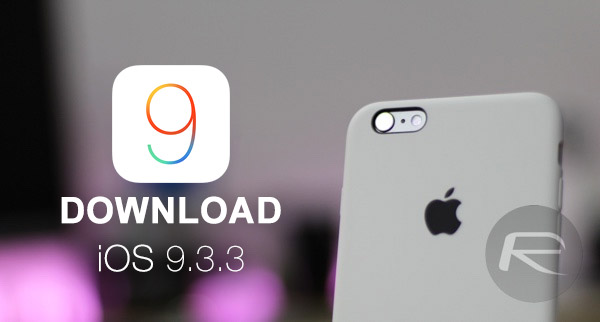 Apple initially released the first beta of iOS 9.3.3 to developers and registered testers back in late May, coming just a week after iOS 9.3.2 was made available for the public to download and install. Of course, given the fact that WWDC was just around the corner, which ultimately saw the first unveiling of iOS 10, it was highly unlikely that iOS 9.3.3 was going to see any real outward-facing changes introduced. And of course, considering iOS 9.3.3 is a relatively minor update to iOS 9.3.2, that turned out to be accurate with the build containing internal bug fixes and performance improvements.

Now that iOS 10 has been unveiled, Apple is clearly looking to tail off support for iOS 9.x, meaning that this latest build will be looking to stabilize and improve iOS 9 as much as possible under-the-hood. With the eventual release of iOS 10 in mind, Apple is making no secret of the fact that it wants as many people as possible to upgrade to the latest version of iOS as soon as possible after it is released.

The full official changelog of iOS 9.3.3 is as follows:

iOS 9.3.3 includes bug fixes and improves the security of your iPhone or iPad. 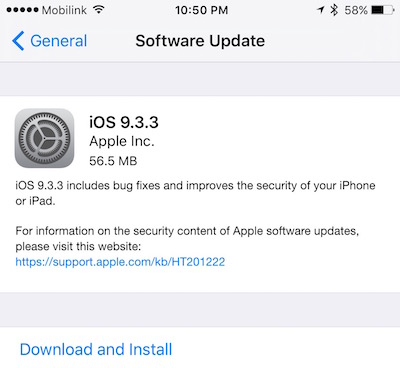 To install iOS 9.3.3, you can perform an over-the-air (OTA) update by going to Settings > General > Software Update on your device and follow through the on-screen prompts to download and install OTA.

Alternatively, you can also download the relevant firmware file for your specific device and go through a full iTunes restore that will see iOS 9.3.3 loaded directly onto your iPhone or iPad.

Jailbreak fans beware; if you’re coming from a jailbroken firmware, then be mindful that there is currently no public jailbreak available for iOS 9.3.3 as yet.