Want To Downgrade iOS 9.3.5 On iPhone, iPad, iPod touch? Here’s What You Need To Know

Yes, it’s still possible to downgrade iOS 9.3.5 on your iPhone, iPad or iPod touch device while Apple is signing the previous firmware. Here’s what you need to know.

If you happen to own an iPhone, iPad or iPod touch, and regularly check in Settings on the off chance that Apple may take the opportunity to release an unexpected software update, then you will probably have been pleasantly surprised by what you find today. 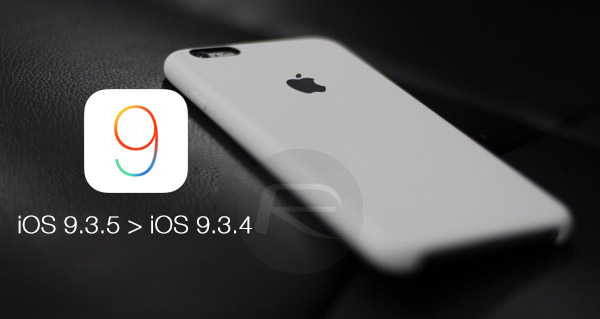 Out of nowhere, Tim Cook’s company has once again managed to blindside us all with the unexpected release of iOS 9.3.5 for compatible iPhone, iPad and iPod touch devices. If you’ve managed to process through the over-the-air update, but have been overcome with instant regret for one reason or another, then it is possible to roll back to iOS 9.3.4. For the time being, at least.

As you might expect, the ability to roll back the upgraded firmware to an earlier version does come with some caveats and considerations that need to be taken into account before diving in. First and foremost, Apple has officially stopped digitally signing and authenticating the jailbreak-friendly iOS 9.3.2 and iOS 9.3.3, meaning that iOS 9.3.4 is literally the only version of the firmware that users can revert back to from iOS 9.3.5.

The jailbreak community may have been awash with activity recently, but there’s still no publicly available jailbreak for iOS 9.3.4 to iOS 9.3.5 firmwares, so if jailbreaking is your motive for downgrading then you would appear to be fresh out of luck.

What this means is that we can’t go back any further than iOS 9.3.4, that too only until iOS 9.3.4 is being signed, which Apple can stop anytime now, after which downgrading to even iOS 9.3.4 won’t be possible. And we can’t jailbreak the device once we’ve upgraded to iOS 9.3.5, whether on purpose or accidentally. So what exactly does that leave in terms of a reason to actually roll back?

The only real tangible reason that some device owners may be pushed to go back to iOS 9.3.4 from iOS 9.3.5 will be in case detrimental performance or degraded battery life occurs, which, in all honesty, is very unlikely considering the serious security fix nature of iOS 9.3.5 update. Still, it is a possibility.

In order to follow the aforementioned guide through to downgrade the iPhone, iPad or iPod touch in question to iOS 9.3.4, you will of course need the individual iOS 9.3.4 IPSW file for your specific device. You can grab that from here: Download iOS 9.3.4 IPSW For iPhone And iPad [Direct Links]. Once downloaded, you can continue with the downgrade guide linked above.

It’s important to note that iOS 9.3.5 is a security update which patches serious vulnerabilities in iOS. If y0u are someone who don’t care about jailbreaking, then updating to iOS 9.3.5 is highly recommended.

Update x1: A new video has popped up claiming to show that downgrading might be possible on 64-bit devices from iOS 9.3.5 using an upcoming tool called “prometheus” if SHSH blobs are saved for the firmware you want to downgrade to and certain other (unknown) conditions are met. We’ll suggest taking this with a grain of salt for now.