It’s official folks! Apple has just sent out media invites for its September 7th event where the company is expected to unveil iPhone 7 and iPhone 7 Plus to the world for the first time. The event will be held at Bill Graham Civic Auditorium in San Francisco on Wednesday, September 7, at 10:00am Pacific Time.

First and foremost, Apple is widely expected to provide the world with the first official look at this year’s iPhone range, likely to be called the iPhone 7 and iPhone 7 Plus. Those devices are expected to feature similar external design and dimensions (with added tweaks) as the current iPhone 6s range, but with a revamped set of internal hardware that will combine with iOS 10 to provide an enhanced hardware/software experience. That will include a bump up in processor to the Apple A10, as well as a dual-lens camera system and potential Smart Connector on the larger iPhone 7 Plus model. 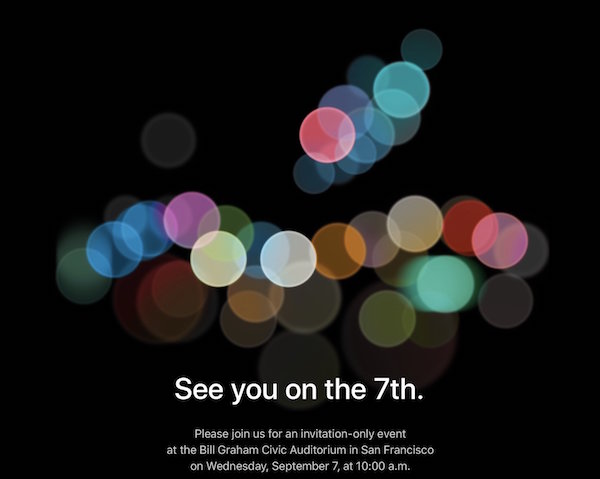 The company is also expected to use the event to announce that the 16GB version of the iPhone is no more, making the entry-level model the 32GB variant, with 128GB and 256GB being other two options. Perhaps the most shocking part of the new iPhone range will be the removal of the 3.5mm headphone socket that has been present on Apple’s smartphone ever since the original device launched in 2007. The iPhone 7, and all models beyond, will rely on Lightning or wireless protocols, such as Bluetooth or AirPlay, for audio transmission.

In addition to bringing the iPhone 7 into the public eye for the first time officially, there’s also a chance that Apple will use the event to unveil Apple Watch 2, which is due for a refresh considering the current hardware has been in the marketplace for coming up to 18 months without change. That product is expected to look very similar to the first-generation hardware, but will feature an improved processor, as well as an integrated GPS chip to allow it to track activity and location independently of a connected iPhone.

As we have come to learn with Apple and these fall events, anything is really possible. The company has used events in the past to announce a solitary product, whereas on other occasions has blown our minds with announcement after announcement. The event itself doesn’t really give anything concrete away, but don’t be surprised if we also get to meet the new MacBook Pro models that we’ve been hearing so much about.