It is finally official folks: Apple will be holding their next media event on October 4th at their own campus at Infinite Loop, Cupertino, CA. The event will begin at 10:00 am Pacific Time. 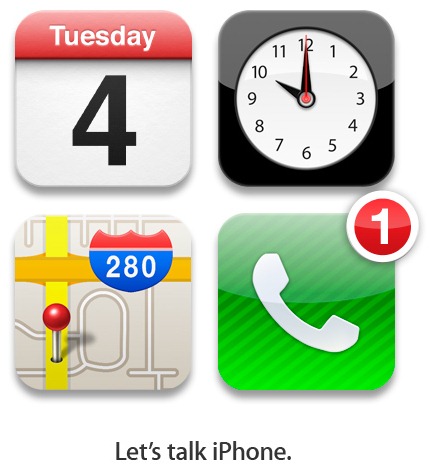 The news comes straight from Apple as the company just sent out invites to media outlets for their event.

We’re really, really glad that Apple has made things official. The number of reports regarding this event, its proceedings and the new product announcements were starting to mess with our heads. This event will end the influx of all those reports; that is until we near potential announcement dates for the iPad 3 and iPhone 6.

This is going to be a very important event for Apple for a couple of reasons: it is the first event that will be under the new CEO Tim Cook who is expected to present the keynote and that it is expected to be where next-generation hardware will be announced.

We have been hearing a lot about this event recently. Two important reports came from All Things D which correctly claimed that the iPhone event would be held in early October and that it would be held on campus in Cupertino, CA unlike previous events which were held in San Francisco.

While we won’t know for sure until the actual announcements are made, the blogosphere is rife with predictions and reports, all of which suggest different things. Discussing each and every one of them would be a useless activity, but we will, however, enlist the possibilities in the next paragraph.

According to the reports, and one member of Apple Board of Directors, there are a total of four possible handheld products that can be announced: a 3G-ready fifth generation iPod touch, a low-end iPhone 4 look-alike meant for folks who can’t afford high end smartphones, a souped-up iPhone 4 with a dual-core A5 chip (that powers the iPad 2) and, lastly, the next generation high-end iPhone (referred to as iPhone 5).

Stay tuned to Redmond Pie, folks. We’ll be bringing you all the updates as soon as they happen. Consider subscribing to our RSS Feed, following us on Twitter and liking our Facebook page to stay updated.