A new post emerging on social media over the weekend claims to give an insight into Apple’s plans for its upcoming iPhone 12 handset. The company’s new smartphone is slated for release later this year, and will purportedly feature a new layout for its triple-lens camera system and will feature a LiDAR scanner in a similar vein to Apple’s latest iPad Pro.

Over the last few generations of the iPhone, Apple has applied considerable research, engineering, and marketing efforts into pushing the capabilities of the camera system that ships with the iPhone.

The inclusion of the TrueDepth camera system on iPhone X was really the start of this push and has resulted in Apple taking larger steps with each mode. The image shared over the weekend – originally courtesy of Concepts iPhone – shows a rearranged camera array inclusive of a Wide-angle lens, an Ultra-Wide angle lens, and a Telephoto lens. There is also a brand new LiDAR sensor.

In order to accommodate the new hardware, the image, if accurate, is suggesting that Apple will arrange the three lenses and the LiDAR sensor in a cluster format to make use of the available space. The LED flash will be placed firmly in the middle to ensure uniformity and to ensure that as little space as possible is used by the new arrangement.

The leaked image gives a decent insight into Apple’s plans for the camera system on the rear of the 2020 iPhone 12 Pro and iPhone 12 Pro Max but it doesn’t showcase the rest of the design or give much away about what is expected to be a bulkier and thicker design over previous models. 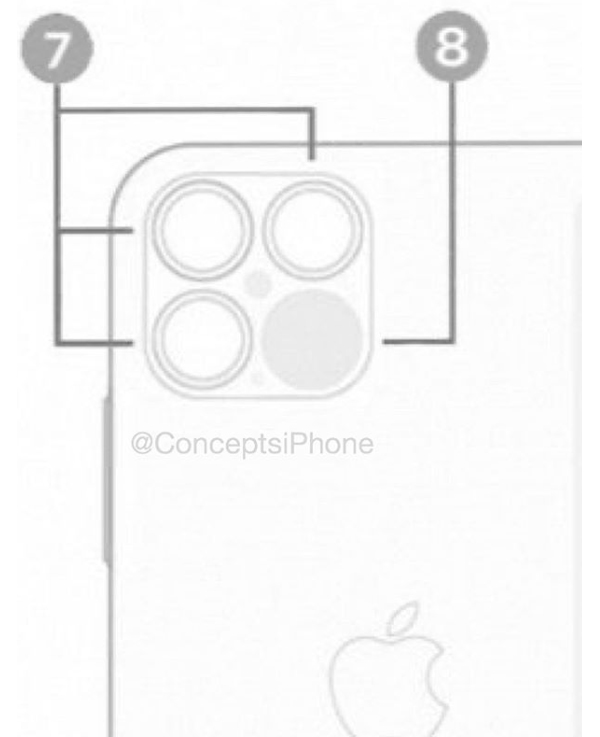 Generally speaking, having information show up on Twitter with some information about an upcoming handset wouldn’t normally be worth talking about but in this particular instance, it originally comes from Concepts iPhone who says it was pulled directly from iOS 14 and then shared by an account with previous good form.

The @choco_bit Twitter account has previously been responsible for leaking accurate information and claims to be run by a person or company who has previously worked as an official Apple Authorized Service Provider.

There is nothing about this leak that seems unreasonable, meaning it’s very likely to be accurate. However, we will know more when we see information about the rest of the design.