Installed iOS 11? Try Out These 20+ New Features On Your iPhone Or iPad [Video]

Installed iOS 11 update on your iPhone or iPad? Here are 20+ new features in a video demo that we think are worth checking out.

As you may already know, iOS 11 for iPhones and iPads is finally here. We have been using it for a few months now since the developer beta was released back in June, so we feel we have a good grasp on the features iOS 11 is bringing to the table. We’ve rounded up 20+ features we think you should definitely try out after updating your iPhone or iPad to it. If you haven’t updated yet, be sure you have a compatible iOS device. A complete list of compatible iOS device can be found here: iOS 11 Compatibility For iPhone, iPad, iPod touch Devices [Final List]. So without further ado, let’s get started! 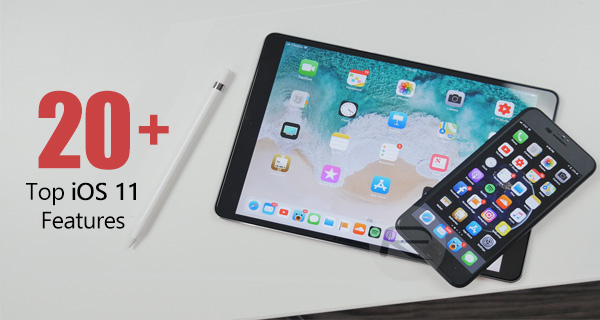 Native Screen Recording: With iOS 11, you are now able to record anything on your screen natively. Yep, that means you can record something off Snapchat without the other person knowing. Looking to get up to speed with this feature? We have you covered right here: How To Use iOS 11 Screen Recording Feature On iPhone Or iPad.

Annotate Screenshots: When taking screenshots in iOS 11, you are now able to modify it by drawing on it simply by tapping on the thumbnail that’ll be on the bottom left after a screenshot is taken. More info on this can be found here: How To Use iOS 11 Screenshot Markup Tool On iPhone Or iPad.

One-Handed Keyboard: Those who have small hands and are iPhone Plus users will be happy to know Apple finally brought the one-handed keyboard feature natively in iOS 11. For more information on accessing this feature, check out our post here: How To Enable iOS 11 One-Handed Keyboard On iPhone.

System-wide Drag & Drop: Now in iOS 11 you can drag and drop text, images, and files from one app to another when on split screen view on iPad, and in limited form on iPhones as well. More on this here: How To Use iOS 11 Drag And Drop Feature In Messages App.

Scan & Sign Documents In Notes App: Using the Notes app, iPad (and iPhone users) can scan documents directly into the app. iPad users can sign off the documents as well using Apple Pencil! For further information on how this feature works, check out our post here: How To Use iOS 11 Scan Documents And Markup Notes Feature.

Easier Setup: iOS 11’s new setup screen makes it easier to set up multiple or new devices from the get go. Have two iOS devices next to each other and it’ll prompt if you’d like to connect the devices and transfer all your data over to the new device. For more on this feature, you can check out our post here: How To Use iOS 11 Automatic Setup Feature On New iPhone Or iPad.

New Icons And Redesigned App Store: A few stock apps such as Contacts, Apple Maps, Calculator, iTunes Store, and App Store got a fresh icon design. In addition to the redesigned app icons, the App Store gets a big overhaul as well with an all-new design.

Siri Improvements: Alongside the new natural voice that Siri has got, Siri is now also able to translate to different languages on the fly. Check here for more info on this new feature: New In iOS 11: Translate Using Siri.

Photos App Updates: Live Photos has new animation options like Loop, Bounce, and Long Exposure. There are also new filters when editing photos in the Photos app like vivid and dramatic effects.

Scan QR Codes: Scanning QR codes is now as easy as simply pointing the camera viewfinder at a QR code and watching the magic happen. For additional information on this feature, check out our post here: How To Scan QR Codes In iOS 11 Camera App.

Additionally, you may like to check out: New In iOS 11: Scan A Router’s QR Code To Join Its WiFi Network.

iMessage Enhancements: In iMessage, we get a redesigned app drawer, new iMessage effects, and the ability to send peer-to-peer payments (not yet available).

New Files App: With the new Files app, you can now browse through your files stored in iCloud, on the local device, and even third-party services like Dropbox and others.

New Apple Pencil Features: Taping with your Apple Pencil on the lock screen will now allow you to quickly jot some notes. We have you covered with the complete guide on it right here: How To Use iOS 11 Instant Notes Feature On iPad Pro With Apple Pencil.

New Split-Screen iPad Features: Not only can you do split screen and have two Safari tabs open next to each other, but you can have a third floating app hovering over the split screens you have open, among some other new changes.

[Bonus 2] ARKit Apps: With Apple having built augmented reality support right in the operating system, there is now going to be a flood of apps taking advantage of the new framework for building augmented reality apps. If you have a ARKit compatible iPhone or iPad, you can check out some of these apps now: 30+ iOS 11 ARKit Compatible Apps Worth Checking Out [List].

More: Of course these aren’t the only features in iOS 11, there are plenty more, and for that, you can check out our exhausted list here: 150+ iOS 11 Hidden / Secret Features For iPhone And iPad [Updated List].