Here’s Samsung Galaxy Note 8 Vs Apple iPhone 8 dummy model comparison shown off on video that is worth checking out.

You would really need to have been hiding in a big hole in the most remote desert in order to be blissfully unaware that Samsung announced the Galaxy Note 8 yesterday, and if we are honest that would be a crying shame. The Galaxy Note 8 is quite the smartphone, and at least until Apple announces the iPhone 8 next month, it is perhaps the most impressive, certainly the most expensive smartphone around. That begs the most obvious question of the year though – just how do the Galaxy Note 8 and iPhone 8 compare? 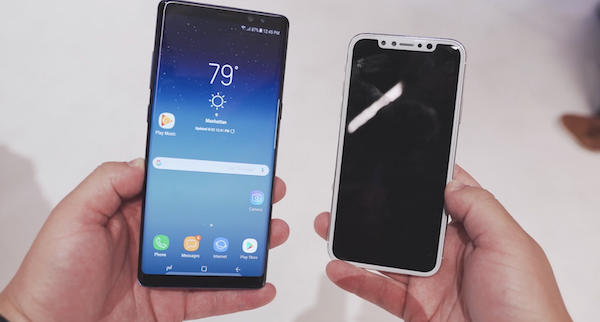 That’s a question that is actually both difficult and easy to answer. On one hand there have been numerous leaks regarding the device already, including dummy models which claim to show us the iPhone 8 in all its glory. On the other hand we simply can never be sure about what the iPhone 8 will look like, or what will be inside it until Apple announces the thing for real. That hasn’t stopped the folks at MacRumors from putting both a real Galaxy Note 8 and a dummy iPhone 8 beside each other and taking video of the event.

The result gives us a nice glimpse of what the two hottest smartphones of 2017 look like next to each other, and shows just how big that Samsung offering really is.

The first thing you notice is the size of the screens on offer here, and the lack of bezels as well. The iPhone 8 will likely have the smaller bezels and better screen-to-body ratio of the two thanks to that notch on top which houses the front facing camera and no chin at the bottom unlike Galaxy Note 8, but that by no means suggests the Note 8’s bezels are large. In fact, thanks to that Infinity Display that is most certainly not the case!

The video put together by MacRumors is well worth a watch if you want to get a glimpse of what $2000 of smartphones looks like, though we still think the real choice between the two comes down to software and Samsung’s S-Pen rather than bezels and screen size at this point. You’ll have to make your own minds up, though.