This means that those with the necessary account privileges can instantly download the latest beta seeds onto all compatible Mac, Apple Watch, and Apple TV devices in order to not just experiment with, but also provide continuous feedback to Apple to improve the platforms. 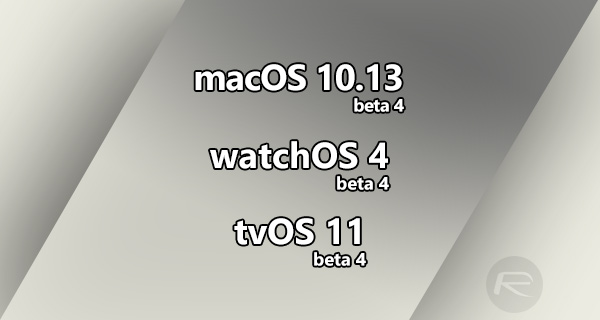 macOS 10.13 High Sierra Beta 4: Beta 4 of macOS 10.13 High Sierra is the next step forward in the development of this particular platform. The release includes all necessary bug fixes and improvements based on user feedback and the roadmap which has been assigned to Apple’s internal engineers. From a feature perspective, macOS High Sierra will be a big deal when it lands publicly later in the year. Apple has made large changes to the Safari browser, the native Mail app, and has even brought machine learning and advanced editing tools to the stock Photos app. iCloud File Sharing, enhancements to Siri, and Live Photos with FaceTime are just a few other key areas of improvement.

watchOS 4 Beta 4: watchOS is one of Apple’s youngest platforms, but one that’s growing up extremely quickly. This latest beta is the fourth in the current release cycle, and instantly brings a number of changes, patches, and improvements to the platform.

From a feature perspective, Apple Watch owners can expect a final release which pays a lot of attention to workout tracking and the health and fitness aspect of the platform. This includes additional power and functionality, such as being able to better track workouts, as well as a visual overall to specific apps to better show and use data.

tvOS 11 Beta 4: tvOS 11 is one of Apple’s platforms which is managing to generate excitement, largely in part to the fact that it’s installed on Apple TV hardware which is starting to power the audio and visual experiences of many homes across the world. tvOS 11 takes that experience to the next level with the introduction of things like AirPlay 2 to allow multi-room audio via hardware like Apple’s wonderful new HomePod speaker. There’s also the integration of an automated light/dark mode which will change the UI depending on the time of day it’s being used. among other things.

Public beta 3 seed of macOS High Sierra and tvOS 11 haven’t been issued to testers of Apple Beta Software Program just yet but will in a couple of days time. In the meantime, all of the above-mentioned updates are available to download right now either as OTA updates or as direct downloads from Apple Developer Program portal.