You can now download watchOS 4 beta 1 for Apple Watch and tvOS 11 for Apple TV. Here are the details on both new beta releases.

Apple’s annual Worldwide Developers Conference (WWDC 2017) continues to be the meet-up which delivers goodies to the community. Official download links for tvOS 11 beta 1 and watchOS 4 beta 1 are now up and running for developers to access for all compatible hardware. Once upon a time, Apple could fill a relatively small time slot at the event with iOS and macOS announcements, but now that the company has to cater to Apple Watch and Apple TV owners, it is an entirely different story. 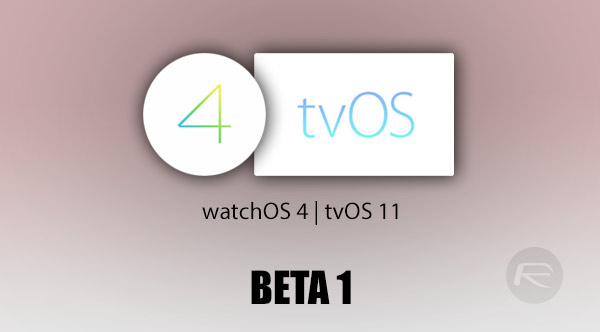 It almost feels like the majority of the opening keynote to a modern day WWDC is dedicated to the unveiling of the next major version of Apple’s multiple operating systems. If you take iPhone, iPad, and Mac owners out of the equation, you still have the millions of Apple Watch and Apple TV hardware in circulation, with the majority of those device owners waiting patiently to see what will be introduced with the next big upgrade. That wait is now over with the initial betas of watchOS 4 and tvOS 11 now being immediately available to registered developers of Apple Developer Program.

Both of these individual platforms have been developed extremely quickly by Apple with the growing user base in mind. This latest version of watchOS – watchOS 4 – is the fourth major iteration of the platform and is immediately available to those with the necessary privileges who want to install it on an original model, Series 1, or Series 2 Apple Watch. For now, Apple is still supporting the original Apple Watch with this release, but it’s unknown if that will continue into watchOS 5 next year.

Things are a little different where Apple TV and tvOS is concerned. tvOS is one of Apple’s fastest-growing platforms, with the significantly impressive progress made over the last twelve months. As with all tvOS releases to date, this latest version – tvOS 11 beta 1 – is only installable on a fourth-generation Apple TV, meaning that there will be a much smaller testing pool for feedback to Apple as it takes tvOS 11 on its journey of progression ahead of an official public launch.

For those registered on Apple’s Developer Program, and who are interested in grabbing either watchOS 4 beta 1, tvOS 11 beta 1, or both, the downloads are up and available now directly from developer.apple.com.

While watchOS 4 will remain a developer only affair, tvOS 11 – like iOS 11 and macOS 10.13 – will be made available to public testers registered on Apple Beta Software Program later this month.