Apple and Samsung is a little more than your average company rivalry. There’s genuine animosity between the two tech titans, and you only have to look at the ongoing litigation for further evidence of the contempt each feels for the other. Unsurprisingly, both Apple and Samsung regularly take shots at each other with ad campaigns, and in its latest, Sammy has taken a swipe at its old adversary in a new fleet of commercials for the Galaxy Tab Pro and Note 3. Check them out after the fold!

It’s a well known fact that Samsung spends tens of millions of dollars on its ad campaigns, sponsoring major events from the London Olympics in 2012 to the current Winter games in Sochi. But the Korean company surely takes most pleasure in having a dig at old rival Apple, and in a new advert for the Galaxy Note 3, makes the point of just how much larger the phablet’s display is in comparison to the flagship iPhone 5s. 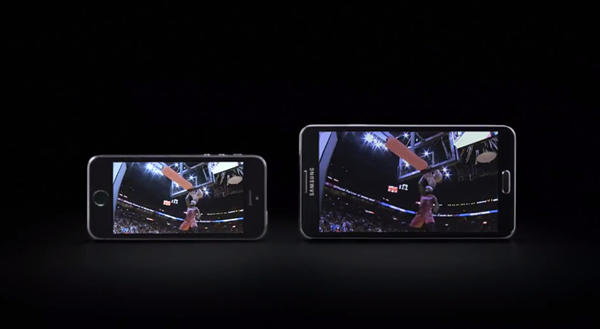 Spending a great deal of that aforementioned wad to draft footage of NBA star LeBron James into the fanfare, the ad declares Apple’s “4.0 inches of non-HD” a total mismatch for the 5.7-inch Galaxy Note 3, and although the running commentary from the narrator is a little over-the-top, he does have something of a point. Rumor does suggest that the the iPhone 6 will sport a similarly large display, but until this happens, Samsung will surely continue to make these cheap, but entertaining size jokes. 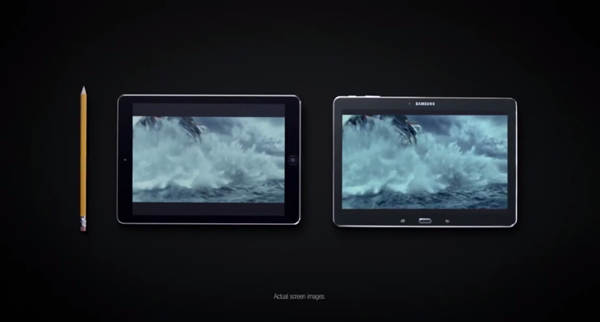 In another ad, this time for the Galaxy Tab Pro 10.1, Samsung makes the point that its latest and greatest slate is thinner than Apple’s, and not only that, but better for watching video as well. The commercial also ridicules an earlier iPad spot by deploying the use of a pencil, and irrespective of whether you’re a fan of Samsung’s product range, it’s hard not to see the funny side of this tit-for-tat.

Below, you can see both of the new ads, as well as the original Pencil iPad commercial to give you an idea of what Samsung is playing at. We hope you enjoy them as much as we did, and although the constant courtroom battles are not something we enjoy watching, some good, old-fashioned commercial-based mockery never hurt anyone!