Here’s Samsung Galaxy S8 Vs S8+ Vs iPhone 7 Vs iPhone 7 Plus specs and features side-by-side comparison in detail.

Unless you have money to burn, or have some kind of unbelievable upgrade deal with your network, the chances are that choosing a new smartphone will typically mean that you have to run with that device for 12/24 months. If that’s the case, then you really need to be putting yourself in the best purchase position possible, which invariably means learning about your primary device of choice, as well as its main competition, and then making an informed decision on the back of that education. 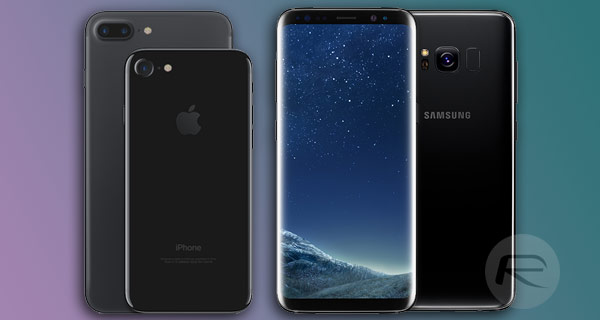 With Samsung’s Galaxy S8 / S8+ officially announced, it’s very likely that would-be smartphone owners will be weighing up the purchase against Apple’s iPhone 7/ 7 Plus, but which should they go for?

Apple’s iPhone 7 range may have been with us for six months now, and Samsung’s Galaxy S8 may not actually start shipping until April 21st, but it’s not hard to instantly suggest that Apple’s iPhone 7 will still be the hardware’s biggest competitor. Different users will undoubtedly be looking for different things from a device, but if you take out an emotional connection, and a love of one company over the other, then you are essentially left with four devices which share some similarities, but also some glaring differences. And that’s where the fun begins.

From a display size perspective, Apple offers its iPhone 7 range with a 4.7-inch or 5.5-inch display. The latter of which definitely can be classed as a “phablet”. The S8 range is immediately different in terms of physical stature to Apple’s iPhone 7, but ships with larger displays, with the S8 offering a 5.8-inch display, and the S8+ living up to its name with a whopping 6.2-inches. That doesn’t take into account the beautiful rounded corners of the screen, but is still highly impressive in a device which measures 159.5 x 73.4 x 8.1 mm and weighs just 173g.

Both device ranges offer similarities in the fact that they both serve up contactless payment capabilities, one via Samsung Pay and the other via Apple Pay. Both have embedded 12-megapixel cameras, with Apple’s iPhone 7 Plus offering 12-megapixel wide-angle and telephoto dual-sensors bundled nicely into the rear of the hardware.

Both are splash, dust and water resistant, and both come in an array of colors and external finishes, including Apple’s stunning new (PRODUCT)Red option. However, Samsung’s S8 does have the benefit of being new and shiny, coming with wireless charging, Samsung DeX, and even a new dedicated Bixby button that offers instant voice control over apps and services.

Of course, even when you consider all features and functionality, you also have to take into consideration the heart, with a lot of smartphone lovers boiling their decision down to one simple thing; iOS or Android? Check out the full comparison table for yourself, and good luck with your purchase, whichever you choose. 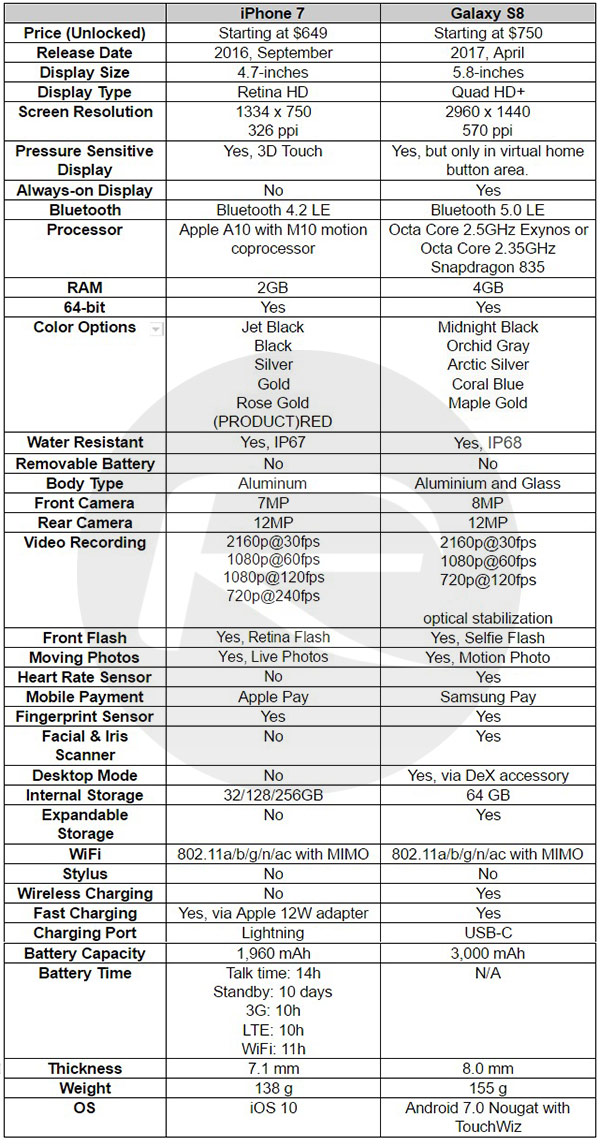 Samsung Galaxy S8+ vs iPhone 7 Plus

Update x5: The video embedded below shows speed and benchmarks comparison between S8 and iPhone 7 Plus: