It’s probably fair to suggest that the majority those who are fortunate enough to get their hands on a cutting-edge, just-announced flagship smartphone, such as Samsung’s Galaxy S8 or S8+, doesn’t immediately think about unboxing it in an attempt to destroy it by dropping it onto the concrete.

However, those device owners aren’t likely fighting for YouTube channel views, unlike TechRax, who has given us an insight into what happens when you take a Galaxy S8 and Apple’s new (PRODUCT)RED iPhone 7 and pit them against a smartphone’s mortal enemy; a concrete floor. 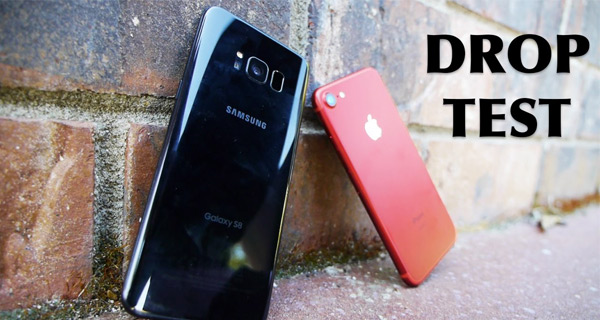 It’s bad enough for people striving and saving enough to own a high-end device like this when channels take every opportunity to think of weird and wonderful ways to destroy the hardware, but even worse when it’s a device which hasn’t even officially been released as yet. It’s even more alarming when you throw Apple’s latest stunning red version of iPhone 7, into the mix.

Still, it is what it is, and these types of videos continue to rack up hits and views so the people must want to see expensive devices being destroyed by pavements.

In an effort to try and keep the drop test as scientific as possible, both phones were dropped without any type of protective cover on them, and both from a height of 5-foot as well as forward-facing tests designed to see what happens when the smartphone hits the floor glass first. iPhone 7 owners, and those looking to purchase a Galaxy S8 when it launches later this month, will be pleased to know that the 5-foot drop test – which is supposed to mimic an everyday accidental drop – resulted in the usual little bumps and scuffs that you’d expect, but nothing major and certainly no smashes or screen breaks.

However, when dropped face down, Apple’s iPhone 7 couldn’t come through it unscathed and walked away with a smashed, but still functional, screen. Samsung’s Galaxy S8 managed to do a full flip reverse and actually prevent itself from landing glass down, which ultimately meant that the display wasn’t cracked and that it would likely walk away from the drop test as the victor. That’s a notch in the durability belt for Samsung.

Check out the drop video for yourself and see if you can handle the random destruction.