We are sure that you have not missed the fact that Samsung has a new smartphone on the horizon, and the talk of the town right now is whether the new Galaxy S8 and S8+ flagships can not only compete with the current king of the hill, the iPhone 7, but also the spectre of the Galaxy Note 7 that has been hanging over Samsung for months. Does the Galaxy S8 offer a new hope for Samsung moving through 2017? 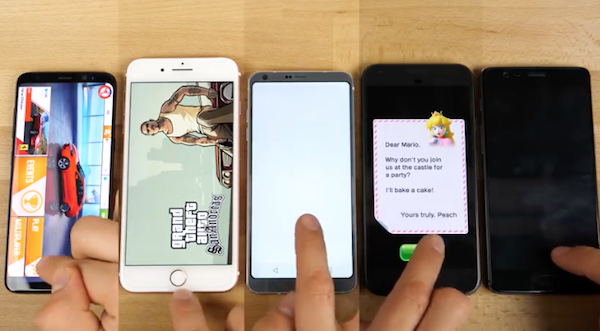 In order to go some way to answering that question, YouTuber EverythingApplePro has taken one of Samsung’s new wunderphones and pitted it against the best that the competition has to offer; the LG G6, Google Pixel, OnePlus 3T and iPhone 7 Plus.

If you are unfamiliar with such videos, then it is important to note that the gist of such tests conducted is simple – take smartphones, have them run a collection of complicated yet popular apps and time how long it takes to go through a sequence of launching them all.

Initially they are launched afresh, but then in order to test performance when loading apps from RAM, the tests are conducted all over again. Scientific? Not entirely, but it sure does make for a good YouTube video and gives at least a glimpse at how smartphones may perform when out in the real world. A glimpse, not a concrete idea. Keep that part in mind when watching the video.

So how do things pan out? Well, we’ll semi-spoil the video for you by saying the Galaxy S8 doesn’t come out top of the pile and LG’s G6 really does not cover itself in glory throughout. You will have to watch the video for yourselves in order to get the full lowdown, but we doubt the outcome will have too big of an impact on Samsung’s sales – pre-orders for the Galaxy S8 and Galaxy S8+ are through the roof regardless.