If there was anything that Samsung simply did not need with the release of the Galaxy S8 and S8+, it was customers complaining that their received handset was suffering from any technical glitches or issues.

After receiving a number of complaints from South Korean consumers regarding a red tint on the display, Samsung has been forced to publicly acknowledge the issue, but has also been quick to point out that it isn’t actually a hardware fault, but rather a configuration which can be manually changed.

A number of consumers in South Korea who were excited to be amongst the first to get and interact with the S8/S8+ were more than a little dismayed to find that the device booted up with an excessive red tint on the display.

As is always the way in this modern world, those with an affected handset were quick to look for answers on the Internet, but also quick to post images of the tinted devices on Korean sites such as Ppompuu and Ruliweb. There was also a very heavy increase in Internet searches for the issue, with “Galaxy S8 Red Screen” being the most popular search term via Naver on Tuesday morning.

An official Samsung spokesperson has now confirmed that the company is aware of the issue, but that it isn’t actually a matter of quality or a defect. There was also the suggestion that anyone with an affected device can simply head into the settings menu of the phone and change the display configurations to get rid of the red tint.

The Galaxy S8 was built with an adaptive display that optimizes the color range, saturation, and sharpness depending on the environment. If needed, users can manually adjust the color range of the display to change the appearance of white tones, through ‘Settings > Display > Screen Mode > Color balance’. 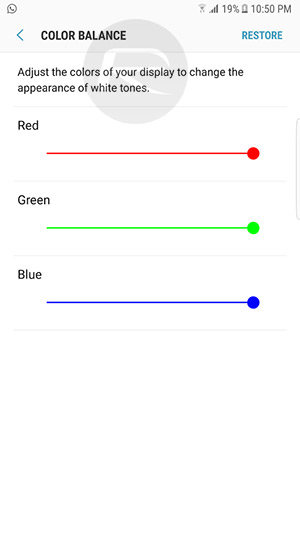 No additional information has been provided, but it would appear that some users are reporting having taken the device into a local service center and been given the advice to swap out the device for a new, non-affected one. These reports are yet to be confirmed or verified, but it would seem highly overkill if the issue can be handled effectively via the phones’ settings.

Given that Samsung had to pull the Galaxy Note 7 from worldwide sale due to an exploding battery issue, the last thing company wants is negative press or consumer unrest about any potential issues with the S8. If the issue is simply one of configuration, then there seems to be no real problem going forward, but it will be interesting to see what happens when the hardware is in the hands of the masses.