Samsung’s Galaxy S8 will be released very soon, and the hype machine is already in top gear. It is obviously inevitable that the newest flagship device on the block is going to be compared with devices that have held that crown in the past, with the iPhone 7 Plus the biggest name around.

With that in mind, our friends over at EverythingApplePro have managed to get their hands on one of Samsung’s new Galaxy S8 handsets and have taken it upon themselves to pit it against Apple’s finest, the iPhone 7 Plus, in a speed test. 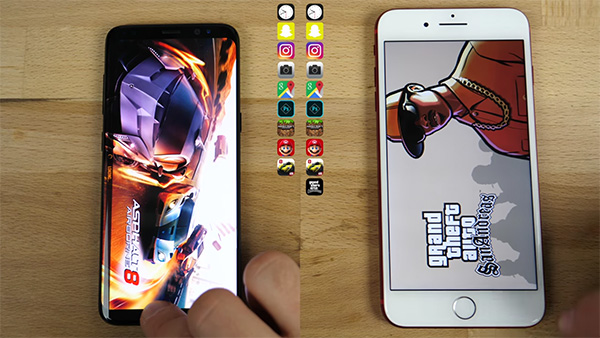 As with other speed tests carried out on camera, the said YouTuber took the approach of launching multiple apps, one after the other, on both devices while running a stopwatch to keep track.

The theory is that whichever phone gets through a whole run of the test apps first is the winner, with the test giving an idea of how a device would perform in a demanding app-driven environment. Further tests include recalling those apps from memory to see how the phones handle multitasking. The results, as you will see from the 10-minute video, are overwhelmingly in the iPhone’s favor.

We will not spoil the video entirely, but what we will say is that the test does throw up some interesting things, particularly in the way the Samsung device seems to perform when under extremely heavy load. As the video points out though, the test being conducted is unlikely to mimic how most people use their devices, but it is clear that the Galaxy S8 did not appreciate being asked to launch multiple large games in quick succession, seeing the iPhone streak into the lead during said portion of the test. Launching the same games one-by-one later in the video shows the Galaxy S8 outperform the iPhone in some tests, suggesting that when it comes to raw speed, the gap between the two devices is minimal.

We suggest you check the video out and make a determination for yourself, but we don’t think we would right the Galaxy S8 off as a power-user’s smartphone just yet.