Christmas is always going to be a big time for companies like Apple and Google. With gifts being given the world over, there’s a high probability that a good chunk of them run either Apple’s iOS or Google’s Android. Both have their own application stores.

As anyone who received a new toy will know, the first thing people with a bare smartphone or tablet want to do is to download apps to use with it. It makes sense, and it’s the reason that app downloads this holiday period have been through the roof, with Flurry Analytics releasing some eye watering figures.

According to their figures, a staggering 1.2 billion apps were downloaded across the globe on Christmas week, eclipsing the average week for December before that of 750 million. Let’s just be clear, 750 million apps a week is not to be sniffed at, either! 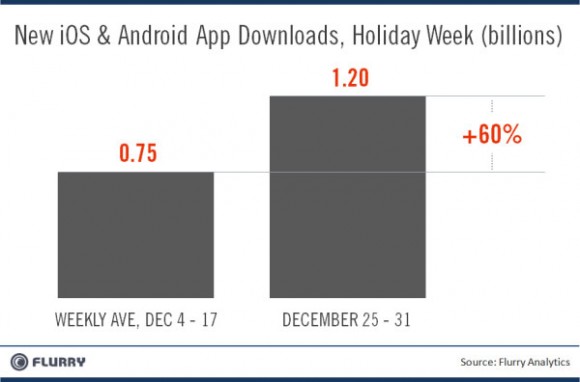 The stats for Christmas day alone are just as mind blowing. According to the numbers, 242 million apps were downloaded during the 24 hours of Christmas day. That’s over 10 million an hour, for those of you still not quite recovered from the festivities. Over 168,000 a minute!

Flurry even broke the numbers down into the countries with the most download activity, just for kicks.

Unsurprisingly, the United States found itself top of the tree, with China and then the UK following the home of Google and Apple in the download stakes. 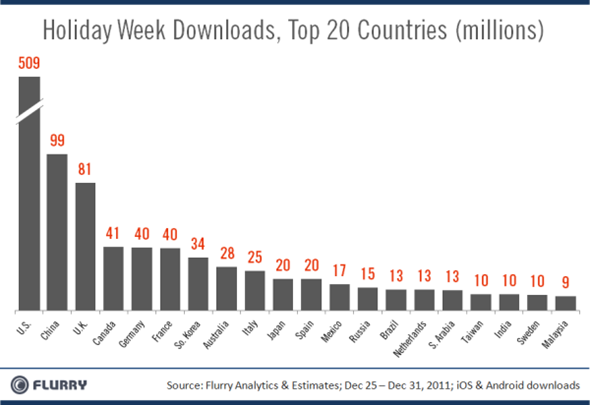 Flurry also believes that 2012 will see the 1 billion downloads a week figure become more common, as more and more people find themselves with multiple app-laden devices in the house. With two smartphones and a tablet no doubt common in a small family – more depending on the ages of any children – then the number of apps downloaded will only continue to rise.

The huge download numbers will also see developers potentially keeping back their biggest releases until the holiday season in order to maximize downloads. Game developers already aim for a mid-December release in order to milk the hype machine as much as possible before Apple’s App Store approval window closes in.

There’s plenty of money to be made in mobile apps, if you get it just right.