We are coming to the end of the Christmas period which generally means that pockets are empty, credit cards are at the limit and households contain a large number of happy people who have been on the receiving end of some generous gifts. If sales figures and trends are anything to go by, it seems that a lot of people are giving the gift of consumer electronics this year which inevitably means smartphones and tablets would have been sitting nicely wrapped under the tree.

The simple mention of a smartphone generally brings to mind two things to the general public – iPhone and Android. Obviously other mobile operating systems exist, but the two big players at the moment, and where the focus lies are iOS and Android. Google have recently announced that they are activating over seven hundred thousand devices, so that would lead you to believe that Android is killing iOS in the activation stakes right? Well, it appears that not everything is it as it seems.

According to reports, the Apple iPhone accounted for a whopping 66% of all sales from direct with AT&T retail stores over the Christmas period. Between December 1st and December 27th, AT&T shifted a whopping 981,000 iPhone units in comparison to a minute 128,000 Android powered devices. The 128,000 Android devices accounts for 8.5% of all sales made in the companies retail stores. Perhaps the most astonishing statistic is that the Android devices were actually outsold by the most basic slider flip devices. 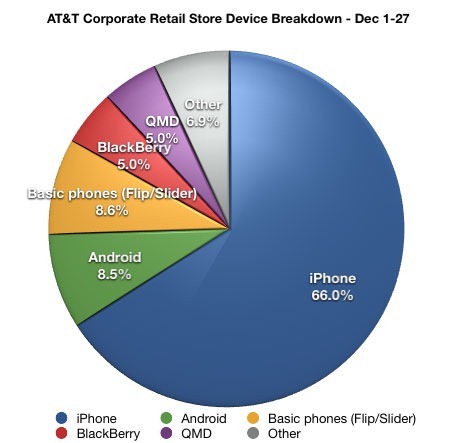 The numbers and statistics show that for every Android device sold, AT&T shifted nearly eight iPhones. It is worth noting that these figures are unconfirmed but show a trend toward a public preference for iOS, at least on the AT&T network.

Up until April of 2011, AT&T were the only network in the United States that actually carried the iPhone. This dominance was shattered when Verizon began stocking the device for general sale and experts say that the large dominance for iOS through AT&T retail stores is partly due to the existing iPhone customer base upgrading to the recently released iPhone 4S.

Perhaps one of the biggest shocks is the performance of BlackBerry devices during the same period. Handsets made by Research In Motion accounted for a minuscule 5% of total sales through the company retail stores. These sales figures only account for devices sold through retail stores and do not take into account telephone or web orders.