Just a couple of weeks ago, an early build of the official Android 4.0.1 ICS ROM for the Galaxy S II was released. Well, today, the official Touchwiz’d Android 4.0.3 ICS ROM has been leaked and we’ve got a step-by-step guide on how tot install it ready after the jump!

News of the leaked ROM comes straight from its source SamMobile – a blog dedicated to covering mobile products by Samsung – in the form of a short post in which they share hands-on video, screenshots and discuss the leak and how to flash it.

Before you begin, please note that this is an early, buggy build of ICS and is, thus, not suitable for use as a daily driver. This only works on the international version of the Galaxy S II and not on the Epic 4G Touch, Skyrocket or other variants.

As always, be sure to back up your data beforehand.

Extract the ICS ROM. Place its contents to your desktop for easy access later in the guide.

Step 2: If you have Samsung KIES opened, shut it down completely.

Step 4: Turn off your Galaxy S II. Once shut down, press and hold Volume Up + Home + Power while booting up to enter Download Mode.

Step 5: Connect your Galaxy S II with PC via USB. ODIN will detect it.

Step 10: ODIN will now flash the leaked ROM to your Galaxy S II. Once phone restarts, unplug it from your PC.

If you followed the steps correctly, a leaked early build of Android 4.0.3 ICS with Touchwiz will be installed on your Galaxy S II. 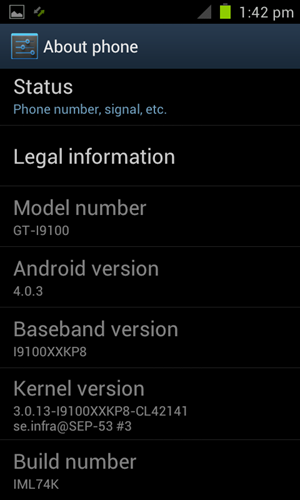 For queries, check out this thread on XDA.