Then there are all the apps which plug into these. Countless Twitter apps, those Facebook apps you used on your iPad because there wasn’t an official version and some that tie into Flickr so you can upload images right from inside that fancy HDR app on your smartphone. We’ve all got hundreds of apps and web apps plugged into our social media lives, and the chances are we can’t even name most of them.

This is where MyPermissions.org comes in. 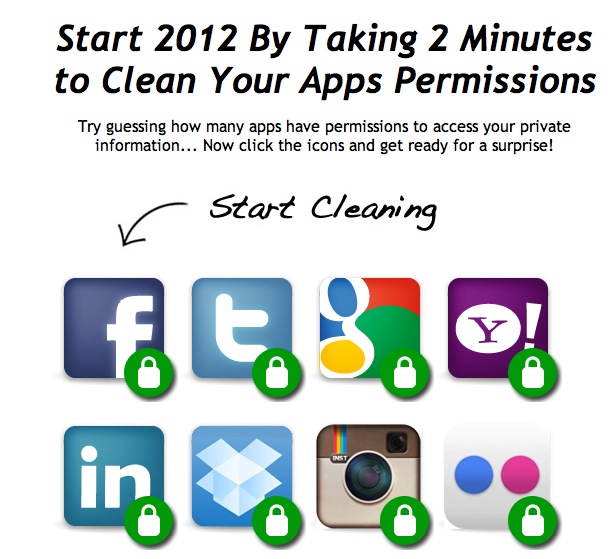 Put simply, MyPermissions is there to help you revisit all the apps that you have granted permission to your online life to. All the usuals are there: Facebook, Twitter, Google, Yahoo!, LinkedIN, Dropbox, Instagram and Flickr. Dropbox and Google, especially, are two that you might not want to give access to without at least reviewing the settings first. Facebook is another.

What MyPermissions does is actually really simple. By offering users a big button to press and linking straight to the relevant pages inside each social network, MyPermissions removes the barriers associated with this important piece of housekeeping. Have you ever tried to find where Facebook hides some of these things?!

The web site itself does not need any access to any of the networks, with MyPermissions simply offering up a link to an URL which will, once you’ve signed in, show you a list of all the apps and web apps that have been granted permission at some point in time. We’re willing to put some considerable money on (not really!) there being more than a few that you can’t even remember what they are. We know we had a few ourselves, especially in the case of Facebook.

For a free service, and one so simple, MyPermissions is something that everyone should at least try out once in a while. By removing any potential hurdles t reviewing your access lists, MyPermissions could well prove to be a life saver at some point down the line.