Twitter for iPhone and Android has had a major overhaul today, with both versions of the social networking app seeing plenty of changes both under the hood, and up front.

Bringing the iOS version up to number 4.0 and its Android brother to version number 3.0, the update has just gone live across Apple’s App Store and Android’s Market, with eager users downloading the update in order to check out the new hotness.

There is plenty of new hotness, too. Both apps have received considerable overhauls, and along with the visual changes it is worth noting that Twitter’s mobile developers have managed to make their apps feel much improved in the speed stakes, though we’re not sure whether the apps really are any faster, or whether the new transitions that have been added are masking some work going on behind the scenes. In all honesty, it probably doesn’t really matter – the apps ‘feel’ faster, and that’s all that matters. 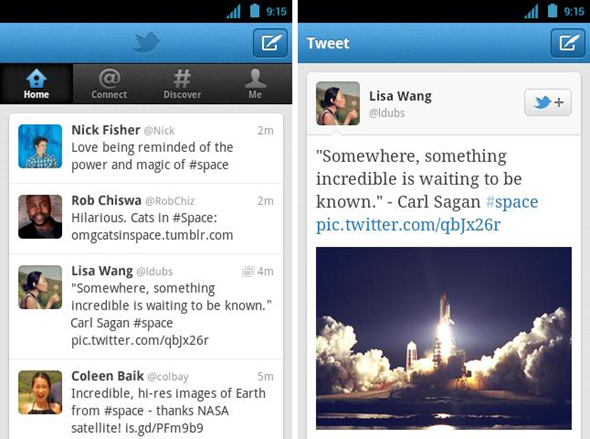 Perhaps the first change people will notice is the removal of the Replies tab, with the home of @mentions and replies replaced by a new ‘Connect’ tab. Similar to the Twitter web app redesign, the mobile apps now show more just replies here, with Retweets and Favorited tweets now added to the mix. It is a minor change, but one that will probably throw you for a loop, at least at first. 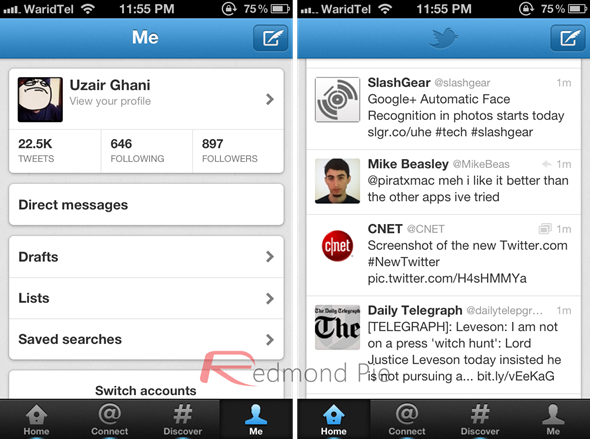 ‘Discover’ is the new home to Twitter trends and search, with hashtags also present for those that love to gather around a particular topic.

It is still early days for the new Twitter apps, and we are still testing out both versions of the app in order to see what has and has not changed. One thing we have noticed, and something that is stopping at least one of the Redmond Pie team from updating their personal iPhone, is the removal of a feature that just made sense until Twitter removed it today.

In previous versions of the iOS and Android apps , users could swipe across a tweet to reveal the option to reply, retweet and more. Now, that is gone, meaning users must tap and wait for a tweet to load before they can take action on it. It may only be an extra tap, but it’s a tap that wasn’t needed yesterday.

We’ll keep playing and report back if we make any huge discoveries, but right now we’re feeling pretty ‘meh’ about the whole thing.