After what has felt like a prolonged period of abstinence from the community, Greek jailbreak developer, Elias Limneos, has not only released an NFC-based tweak which is the first of its kind, but has now also teased an amazing looking new jailbreak tweak which brings insane 3D animations to a jailbroken device’s icons and SpringBoard.

A number of popular jailbreak packages – such as Barrel and Cylinder – have brought some wonderful animations and effects to a jailbroken device in the past. 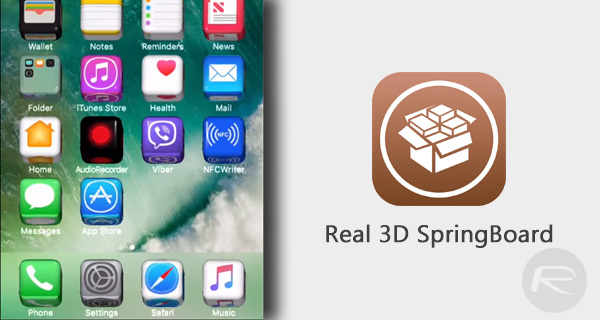 Those packages introduced the ability for users to change how the icons animate when a user scrolls between SpringBoard screens. However Limneos has a little bit of a reputation for dreaming big, and instead of just thinking about icon animations it seems he has imagined a jailbroken experience where the SpringBoard is actually live in 3D with Real 3D SpringBoard:

What if SpringBoard was in live 3D with accelerometer-based movement? With 3D effects, scene lighting, morphing, even with a solar system representation while you scroll? Soon…

The accompanying video does a wonderful job of showing off exactly what Limneos has imagined for this new package. Rather than simply adding an effect to the SpringBoard, the developer has literally taken the experience into the 3D world by not only making the icons look stunning as 3D cubes but also introducing a stunning solar system representation when the user is scrolling through the device Home screens.

The world of jailbreaking is certainly an interesting place at the moment. There hasn’t been a great deal of activity in terms of new jailbreaks releases over the last six months or so, which has even led to a number of people who have historically been extremely important for the art of jailbreaking to stipulate that they believe it is actually coming to an end.

Regardless of whether you subscribe to that opinion or not, it is still great to see people like Elias Limneos attempting to push the boundaries of what’s possible and introducing tweaks with functionality and experiences which have never been offered before.