The popular emulator GBA4iOS, which allows those running on iPhone, iPad and iPod touch to relive the days of the standalone Nintendo mobile consoles by running old Game Boy Advance ROMs, has thrived since its release a couple of months back. But the company behind the famed gaming machine has brought the fun to an abrupt end by sending a DMCA take-down request to the emulator’s author, and for now, the GitHub repository and website are both down “until further notice.”

For those who’re jailbroken, emulators are aplenty, and one can enjoy titles from a multitude of antiquated platforms including the likes of the SNES. But for those who don’t wish to enter The Darkside and jailbreak their iOS device, GBA4iOS recently offered some solace, and having released in late February, has since been downloaded many times by nostalgia-befuddled gaming fans. 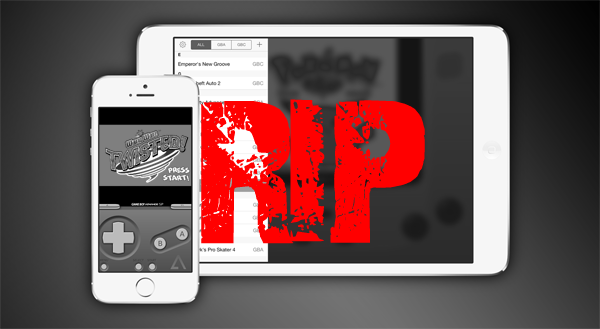 But like most services of questionable legitimacy, it hasn’t taken long for Nintendo to wade in and spoil the party, sending lead developer Riley Testut the take-down in the last few hours. Testut shared the news via his Twitter page, which basically means that nobody will be able to grab the software for the time being, but given that he also goes on to note that downloads are only “temporarily” suspended, there’s certainly scope for a Popcorn Time-like revival for somebody brave enough to get involved.

On a side note, it’s far from surprising that Nintendo is against this kind of activity. The company has staunchly opposed a move into the Digital Age, refusing to port any of its popular titles to mobile while instead continuing to flog a half-dead horse in the 3DS.

Given the successes of the App Store and Google Play, which now boast hundreds of thousand of titles each, one might have though that by now, Nintendo would have caved in. The likes of Super Mario Bros. and Zelda could make Nintendo fortunes if released to mobile devices, and that’s not even taking into account the dozens of other popular titles that continue to be forgotten as the Japanese maestro defiantly digs its heels into the ground.

Nevertheless, while Nintendo continues to do things its own way, those wishing to enjoy the aforementioned titles will have to refer back to the jailbreaking scene, although with Testut seeming to imply that all is not lost, we’ll be sure to keep you guys posted on any scent of a GBA4iOS rebirth.