All manufacturers should be well aware by now that it’s nigh-on impossible to keep anything secret these days. And that includes the world’s richest technology company, Apple Inc.

Several new iPhone 8 leaks have made their way into the public domain over the last few days, with the latest schematics giving additional insight into the design of the device, as well as corroborating various previous reports suggesting that the hardware will ship with a full display and a vertical camera design.

One of the immediate things to take away from this latest schematics leak is just how stunning the display on the device will be. The orange outline of the imagery gives an indication of the area that the new OLED display will cover. It’s immediately evident that bezels will be almost non-existent on the left, right, and bottom edges.

The same can nearly be said for the top of the device, but there is a tiny cut-out in the center which will presumably house the forward-facing camera, the device’s microphone, and ambient light sensors which makes it into every iPhone.

What’s particularly interesting is that the schematics show true edge-to-edge display that will undoubtedly offer a stunning visual experience, and which not only corroborates previous reports about the display, but also seems to rule out the speculation about Apple embedding the forward-facing camera under the glass panel of the display. 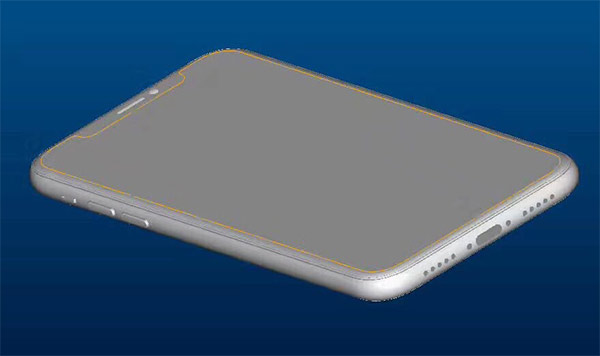 If these images are to be believed, then iPhone 8 will forgo that intelligent engineering exercise, and simply come with a small cut-out at the top of the display for the aforementioned camera and sensors. 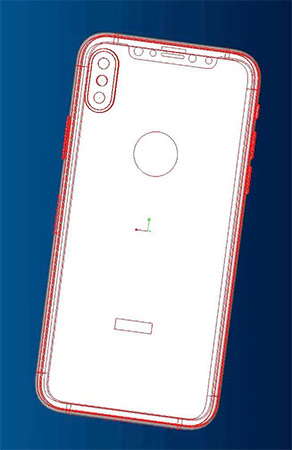 The new rear schematic also clearly shows that the hardware will come with a vertically aligned dual-lens camera system as opposed to the horizontal configuration found on iPhone 7 Plus. There’s also a circular area just above the center of the device which once again conjures up images of a rear Touch ID sensor. Benjamin Geskin, who has shared these images, believes that this is not the case and that the circular area is simply meant to suggest the positioning of the Apple Logo on the rear of iPhone 8.

Excited Apple fans will likely get the first glimpse of iOS 11 in the coming days, but will have to wait until the fall to get an official look at the first iPhone to ship with that firmware installed.