A set of schematics have leaked purporting to provide information about Apple’s upcoming iPhone. This is the first leak of this particular nature pertaining to Apple’s next-generation smartphone, and, if accurate, give us an insight into the design changes that will make it into the iPhone designed to celebrate the tenth anniversary of the device.

The technical schematics, which have been posted directly to Chinese social networking site Weibo, are said to have been acquired directly from the Foxconn, the manufacturer charged with assembling Apple’s iPhone hardware.

The leaked image is by no means a full breakdown of the speculated device, but does provide enough of a glimpse of the front and rear of the device to allow us to learn a little bit more about the hardware, as well as make some additional assumptions on what we may be getting this coming September.

First of all, the image showing the front of Apple’s next-generation iPhone quite clearly represents a device with minimal bezels around the display. The speaker at the top of the phone, as well as the front-facing camera aperture, is clearly visible, but other than that we have a device which is predominantly dominated by the large display, which will presumably be an OLED panel.

There’s also no sign of a physical Home button, and no space left underneath the display for one to be added, which would suggest that we are indeed about to get an iPhone with a virtual Home button experience. If these schematics are legitimate, of course. 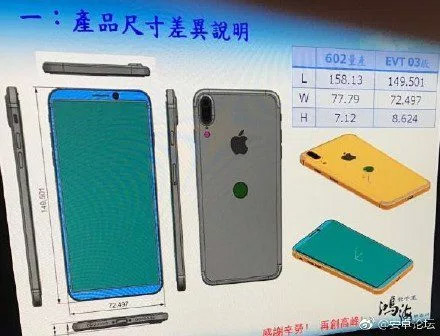 From the rear, the leaked images immediately show a redesigned camera module on the top-left hand side, with the vertical dual-camera arrangement rather than horizontal. There’s also the presence of the familiar-looking LED flash. The interesting thing here is that the schematics show that the Touch ID sensor has been moved to the back of the hardware in a very un-Apple like move, which would suggest that company may have abandoned plans to have a virtual Home button experience with the Touch ID sensor embedded below the display. The bottom of the device, which shows the Lightning connector and speaker grilles, doesn’t seem to have changed at all.

The schematics also detail the dimensions of the iPhone 8, and seem to corroborate earlier reports suggesting that the iPhone 8 will have a chassis which would be about the same size as the 4.7-inch iPhone 7. The iPhone 8 is shown to be 11mm taller, and 5.4mm wider than the iPhone 7.

As interesting as these potential reveals are, we still need to treat them entirely with a pinch of salt until we see any corroborating evidence to suggest that they are legitimate. Some of the things shown in the leak are expected, whereas others, such as the Touch ID sensor on the back of the hardware, leaves us to believe this could be an elaborate mockup, or one of the possible designs still being considered for this year’s iPhone.