Getting involved in the pre-order chaos for iPhone X and actually managing to secure one of the initial units is exciting enough. Checking the status of that order and seeing that it has changed to “Shipped” or “Dispatched” is a whole new level of excitement.

As part of the natural order progression, Apple has started updating customers’ orders to let them know that their pre-ordered iPhone X unit has shipped, and is on its way to them ahead of the release day tomorrow.

There’s typically a process and rollercoaster of emotions that excited iPhone purchasers go through at this time of year. Those emotions have seriously been heightened by the fact that this isn’t just another iPhone release, as well as the fact that stock levels seemed very low this time around making obtaining a device on launch day an achievement in itself. Part of that process is getting the notification from Apple that a device has officially been shipped – or “dispatched” if you are in the United Kingdom – but in reality, we know the device has already been on a long journey through various international delivery systems at this stage, so the notion of it being marked as shipped now doesn’t really mean anything.

It may be relatively meaningless when you put it in full context of the journey that iPhone X actually goes through to land on your doorstep, but it’s still highly exciting to get that notification and get the official confirmation that nothing has gone wrong or that the order hasn’t been delayed and is on track for timely delivery on November 3.

It is just a case and a matter of time now for that knock on the door to happen and the UPS delivery driver handing over Apple package containing the highly anticipated iPhone X. 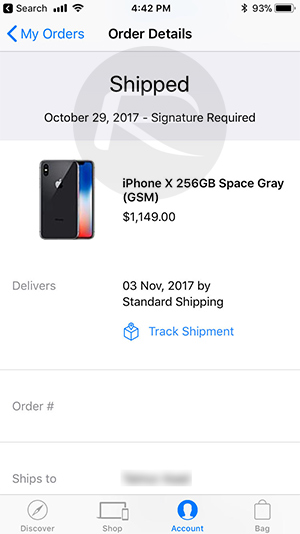 Pre-order status in the U.S. 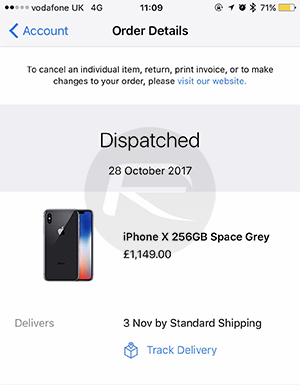 Pre-order status in the U.K.

We can only presume that Apple produced as many iPhone X handsets as it possibly could ahead of this pre-order as it doesn’t seem to make sense at this stage to artificially limit the rollout under the guise of depleted stock levels. Whatever those initial levels were, they sold out in minutes on a global scale, netting a small fortune in revenue in the process. And that doesn’t take into account the number of pre-orders sitting in Apple’s system with a 5-6 weeks delivery prediction.

If you have pre-ordered the device and are expecting release day delivery, then make sure to keep checking your account for that shipped confirmation.