When it comes to high-end smartphones, battery life is king and being able to get a power-user through a full day of usage is the kind of thing that many people need from a smartphone, and that often costs, well, extortionate amounts of money. The iPhone X, recently released by Apple at the very tip of the smartphone pyramid, is no different.

In order to see how well the new release stacks up against the competition, YouTuber Mrwhosetheboss recently published a video in an attempt to answer the questions surrounding the iPhone X’s battery. 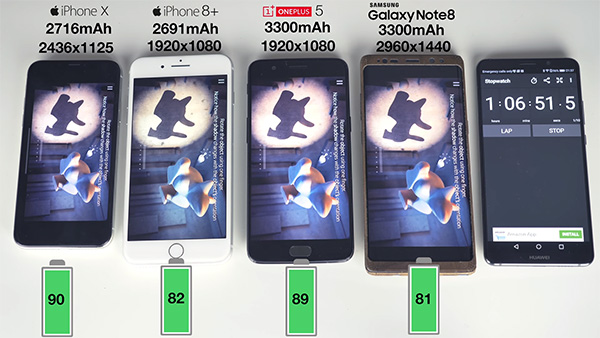 By pitting the iPhone X against the iPhone 8 Plus, OnePlus 5, and Galaxy Note 8, the video shows how the smartphone compares with other high-end devices when it comes to battery life. The tests all saw the devices run with radios turned on, although the iPhone X and iPhone 8 Plus both had their TrueTone displays deactivated in order to create parity with their Android counterparts. The whole test involved firing up different benchmark tests, games, Instagram as well as other data and pixel-heavy applications to stress-test the devices as much as possible, with the results recorded on video for all to see.

So how did the iPhone X stack up? Not bad at all, really.

With the iPhone X ultimately losing out to the OnePlus 5, marginally, it’s worth noting that the iPhone X has a smaller battery and a higher resolution display to power, meaning the loss by just 13 minutes is neither here nor there. More interestingly, the iPhone X beat out the iPhone 8 Plus by around 30 minutes, perhaps tying in well with Apple’s claims that the iPhone X can outlast an iPhone 8 by around two hours.

This test is, of course, nowhere close to being scientific, but if you want a purely anecdotal idea of how well an iPhone X battery will perform, this is one way to get it.