There is certainly no shortage of smartphones to choose from these days and half way through 2017, we have already been treated to some great device releases. The Samsung Galaxy S8 and S8+ were two such releases, and the OnePlus 5 joined those phones on the market very recently indeed. 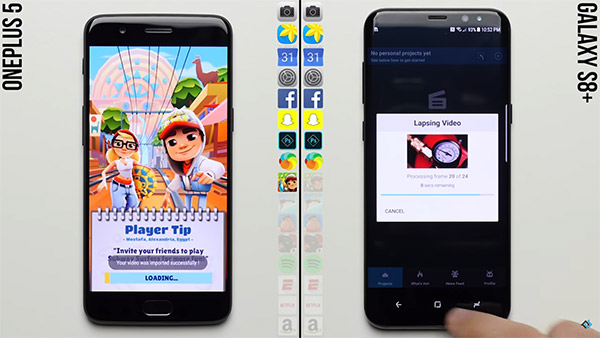 With the latter so new to store shelves, it is understandable that it is getting a lot of attention right now, and it is to be expected that it will be compared with the current Android phone king – the aforementioned offerings from Samsung. That explains why YouTube channel PhoneBuff has taken a Samsung Galaxy S8+ and a OnePlus 5 and put the pair through a test to see just how well they stack up to each other.

If you are unfamiliar with the videos that PhoneBuff puts out, the gist is a simple one: both of the smartphones on test are put through their paces side-by-side with a stopwatch running. A number of apps are launched in sequence on both devices once, and then all over again straight after. This tests how quickly the phones launch those apps initially and then also tests how well those apps are managed in memory by launching them a second time around. At the end of it all, times are shared, showing how quickly everything happened across both devices.

So how did the two phones do? Well, the upshot is that despite using the same Snapdragon 835 and UFS 2.1 storage, the OnePlus 5 outpaced the Galaxy S8+ in both the initial loads and memory-based re-loads of apps, with the speed at which the device handled the test showing that it is not just about the hardware inside but also the software optimizations running on that hardware that decide how well a device performs. The Galaxy S8+ is no slouch, but the OnePlus 5 is very quick indeed.

Check the video out for yourselves to get an idea of how things played out, though whether this would change our buying decision or not, we do not know – the Samsung Galaxy S8+ is one hell of an all round package.