iPhone 6s Plus vs iPhone 6 Plus: Speed Test Video

Throughout the seven minute video the newer iPhone 6s Plus comes up trumps compared to its older brother, though perhaps not quite to the extent that some may expect. In the testing shown in camera the newer handset tends to load apps around 20% quicker than the last year’s model, with some tasks actually taking the same amount of time. While it’s true that these tests are far from scientific, some may have expected to see more impressive load times. 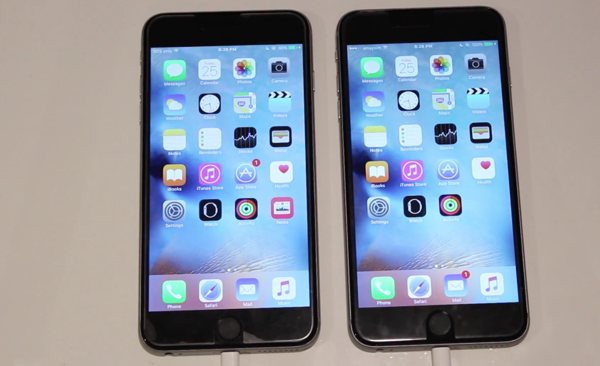 As for Geekbench benchmarks, the iPhone 6s Plus shows CPU performance of around 1.6x faster than last year’s model, so the expectation of faster app loading may not be too unrealistic. Right now though, we’re willing to blame the test rather than the new iPhone’s specifications.

One specification that has received a lot of attention is the extra 1GB of RAM in the new phones, bringing the compliment up to 2GB. That won’t make a huge difference to app loading times, but those switching between apps will see that they don’t need to reload data quite as often.

What’s clear at this point is that the new iPhones are no slouch when it comes to performance, even if this particular video doesn’t show the speed improvements in real world usage that some may have expected.

Maybe if the test was carried out with many backgrounded apps in multitasking switcher, the result would have been significantly different due to double the RAM in 6s Plus vs 6 Plus?

In any case, we will have a test of our own soon here at RP pitting iPhone 6s Plus not only against last year’s iPhone 6 Plus, but also against some of top Android flagship smartphones of 2015. Stay tuned.