The iPhone 6s may have been been recently introduced to the world surrounded by excitement and fanfare, but that doesn’t give Apple an immediate right to expect to dominate the smartphone market over the next quarter.

Granted, the technical specifications that ship with the iPhone 6s are impressive as is the physical appearance of the device – a design that we know resonates with consumers due to it being proven by the popularity of the iPhone 6. But what about competing devices like Samsung’s Galaxy S6? Let’s take a look at each device to see how they measure up. 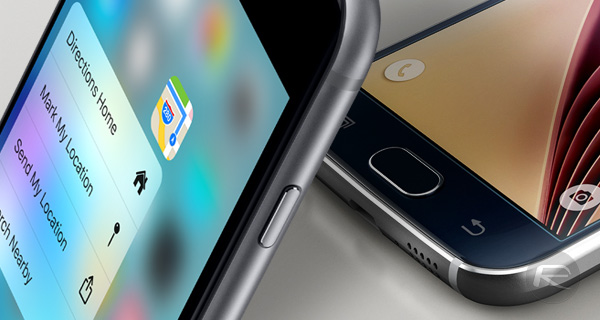 Both Samsung’s Galaxy S6 and Apple’s iPhone 6s are beautifully designed. Due to its “s” generational evolution, Apple’s iPhone borrows much of its physical appearance from its predecessor, the iPhone 6, shipping with an almost identical metal unibody. 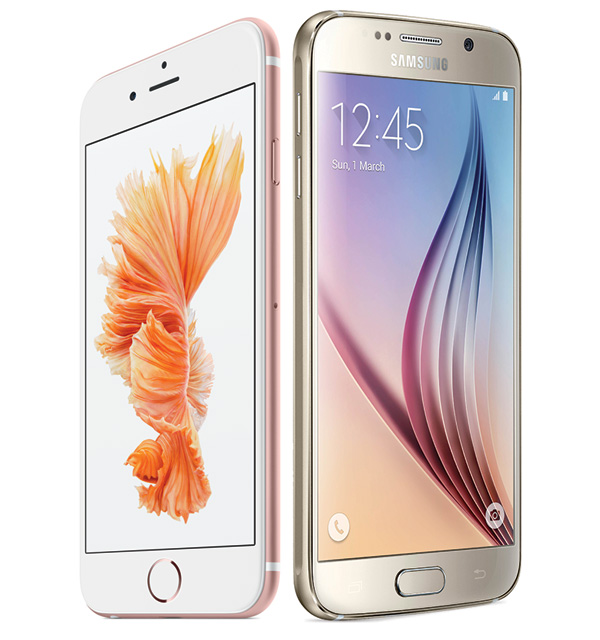 Samsung’s Galaxy S6, on the other hand, has a mix of aluminum and glass body to capture the attention of consumers. Preferring one physical design over another is really a personalized decision, but both devices are undeniably beautiful. 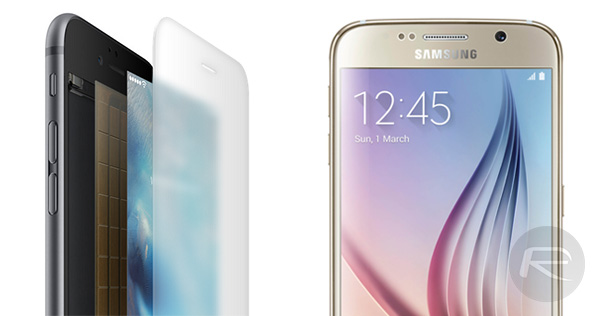 The accompanying display is the window to the soul of the device, and is therefore one of the most important aspects of any smartphone or tablet. Apple’s iPhone 6s comes with a 4.7-inch Retina HD display, with a 1334 x 740 pixel resolution serving up 326 PPI. Of course, there’s also the addition of 3D Touch technology that opens the device up to a whole new range of possibilities. It’s basically a pressure sensitive display that can sense three different level/pressure of touch. Here’s how 3D Touch in iPhone 6s works:

After the display, consumers are generally interested in just how much processing power their kit ships with. As we already know, the Galaxy S6 packs an octa-core processor comprising a quad-core 1.5GHz Cortex-A53 and a quad-core 2.1GHz Cortex-A57. There’s also 3GB of RAM alongside that beast. Apple’s latest iPhone ships with its own Apple A9 64-bit processor, which has the M9 motion coprocessor built in. The iPhone 6s has been confirmed to ship with 2GB of RAM, and as we’ve been shown time and time again, Apple’s harmonious collaboration between hardware and software generally gets the best out of what it’s given.

This one is really chalk and cheese. Day and night. Entirely personal preference. The iPhone 6s, of course, ships with iOS 9 pre-installed. The Samsung Galaxy S6, of course, serves up the latest final version of Android Lollipop. Features and functionality within each platform are extremely well documented, both officially and by the likes of ourselves. However, what it really boils down to is if the decision was made purely on the underlying operating system, would you be more comfortable tying yourself down to Apple or Google’s ecosystem?

This one is a little trickier. While specs will tell you that Galaxy S6’s 2550mAh means better battery than iPhone 6s’s 1715mAh, in real world tests though, it will be another story altogether. Galaxy S6’s Quad HD screen and TouchWiz software reportedly gives worse battery time than even its predecessor. Apple on the other hand claims that new battery management in iOS 9 and the battery efficient A9+M9 chip means iPhone 6s gives same battery time as iPhone 6 despite having 200mAh less battery capacity.

According to Apple, iPhone 6s should give you 14 hours of talk time, 10 days of standby, 10 hours of LTE or 3G usage and 11 hours of WiFi usage. Samsung doesn’t provide any official battery time stats for battery in Galaxy S6.

Both devices ship with phenomenal cameras. It’s as simple as that. Samsung’s Galaxy S6 serves up a stunning 16-megapixel rear shooter with 4K video recording. With that said, that’s pretty much all it is – a really polished and capable camera. The iPhone 6s, on the other hand, may come with a 12-megapixel module, but it does provide the option of Live Photos, which essentially means that every image taken is also stored as a very short video clip that can be used as a wallpaper. And as for videos, the iPhone 6s is also capable of shooting videos in 4K.

This is where we could find a number of individuals actually splitting off towards Apple or Samsung. Apple’s iPhone 6s starts at $649 for a SIM-free, unlocked, 16GB version in Space Gray, Silver, Gold or Rose Gold color options. Samsung’s Galaxy S6, on the other hand, is slightly cheaper (after the recent price drop), starting at around the $576 mark for a SIM-free option available in four different color options as well. Given the fact that it launched in April, it should be widely available right now.

When it comes down to it, both handsets look fantastic. Both devices are undeniably powerful and should be able to handle most modern smartphone tasks with relative ease. Both come with biometric fingerprint detection as well. The choice really does come down to personal preference. Android or iOS? Apple or Samsung? Tried and tested or new to the market? Maybe the likes of 3D Touch and Live Photos seals the deal for you? Or maybe you prefer Quad HD screen and wireless charging in Galaxy S6? The choice is yours to make.

Take a look at the full specification breakdown below and see what you think. 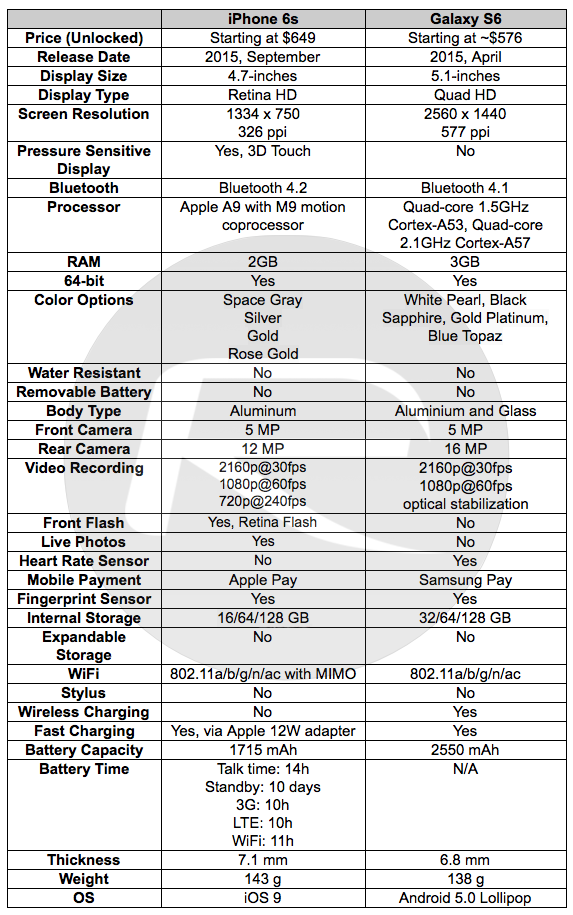