Someone at Samsung needs to get hold of its PR department, possibly giving those within it a little shake. Something is clear amiss over there.

With the smartphone buying world seemingly in iPhone release day mode today, Samsung apparently decided that it could use that fact to its advantage, and we’re not sure we follow along with the logic. The whole thing went down at London’s Regent Street Apple Store, where iPhone buyers were lining up to get their hands on Apple’s new iPhone 6s. Samsung used that opportunity to send people out with signs, pillows and blankets with the aim of persuading iPhone buyers to switch to one of Samsung’s new Galaxy smartphones.

According to reports, Samsung’s Iris PR firm sent people wearing white hoodies to explain where iPhone buyers were going wrong, laden with signs showing Samsung’s “#NextisNew” slogan. The signage also used “the itch to switch just got bigger” as a pointer to the Galaxy S6 Edge+, Samsung’s larger handset that isn’t quite a Galaxy Note 5. Which makes sense, seeing as the UK isn’t getting the Galaxy Note 5. But that’s a different conversation for another time. 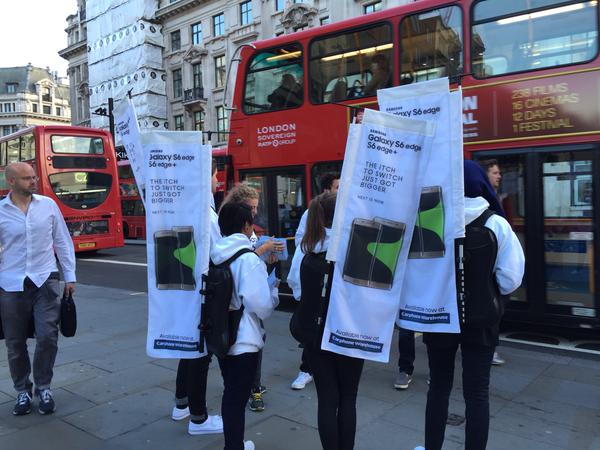 Where our problem with all of this comes into play is the fact that Samsung chose to try and persuade people to drop their interest in an iPhone in favour of one of its own handsets. These are people that are in a line, possibly having been there for hours if not days. Who really thinks they are going to decide to change their mind and buy a Galaxy S6 instead?

We find it hard to ignore Samsung’s ads from previous years which declared all those lining up for iPhones were sheep. Now Samsung apparently wants the very same people it insulted to rush out and buy its phones.

Maybe that’s the kind of thing you have to do when you’re posting poor quarterly results. A lot.