Apple has been making plenty of noises about the quality of the display used in the iPhone 11 Pro, going so far as to rename it the Super Retina XDR. Now it seems that Apple might have had a point when it got all excited about its capabilities.

That’s following the news that DisplayMate has shared a new review of the display used in the new iPhone 11 Pro and iPhone 11 Pro Max. According to that review, the panel received DisplayMate’s “highest ever A+ grade” while also grabbing the “Best Smartphone Display Award,” too.

Apple is no stranger to such awards, having already picked the same one up last year for the display used in its iPhone XS. However, the iPhone 11 Pro takes things up to… 11!

The Super Retina XDR display boasts not one but two new record levels of brightness and understands when to use them. It hits up to 800 nits when you’re out in the sun — great for shooting and making selects on the go — and up to 1200 nits when you’re viewing extreme dynamic range content. It’s like having a Pro Display XDR on your iPhone.

While it’s debatable whether most people will notice any of the improvements the new display offers, especially in normal use, it’s still an impressive feat. However, if you are able to discern the improvements afforded by 1200 nits of brightness when watching HDR content, we’re sure you’re already very pleased with your iPhone 11 Pro. 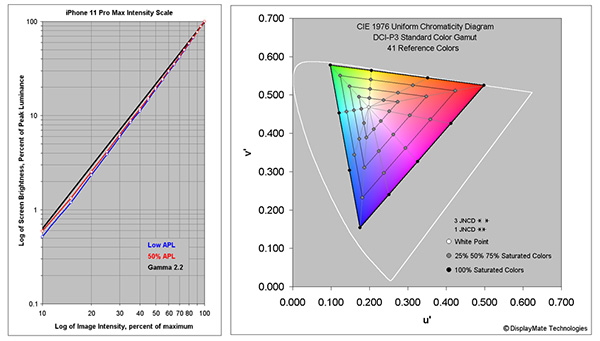