The iPhone Dev-Team has released an updated version of Redsn0w 0.9.9 which not only brings support for iOS 5 jailbreak (final) for Windows users, but also an important Location Services issue fix for iPhone 3GS users who are running iPad’s 06.15 baseband.

This release of Redsn0w comes almost a week after Redsn0w 0.9.9b5 was released for Mac users which brought support for jailbreaking final public version of iOS 5 for the very first time.

So what’s new in Redsn0w 0.9.9b6? Well if you don’t have a iPhone 3GS sporting 06.15 baseband, and you are already jailbroken on iOS 5 using either Redsn0w or Sn0wbreeze, then you really don’t need this update. This new release basically brings a functional and cosmetic fix for 3GS’ users with 06.15 baseband that eliminates network crash when using Location Services in iOS 5.

From the iPhone Dev-Team:

We’ve released version 0.9.9b6 of redsn0w, with both a functional fix and cosmetic fix for iOS5 jailbreakers. For iPhone3GS owners with the 06.15 baseband, this redsn0w eliminates the network crash you saw when using Location Services in iOS5 (in fact, you don’t even need to disable Location Services anymore during the initial setup). The cosmetic fix is to the visual countdown you see when going into DFU mode.

It’s okay to re-run this redsn0w over an existing device jailbroken at iOS5. Just choose “Jailbreak” again and de-select Cydia (in other words, all the checkboxes will be unchecked).  If you are lucky enough to have an old-bootrom iPhone3GS, please pre-select the IPSW first (redsn0w can’t yet auto-detect the FW version of your old-bootrom 3GS if it’s already been jailbroken). 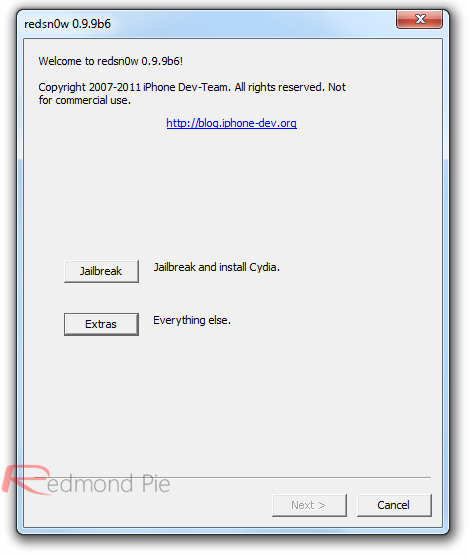 It is important to note that iOS 5 jailbreak for iPhone, iPad, and iPod touch is currently limited to tethered boot only, which means that it requires connecting iOS device to be connected to a computer running Redsn0w whenever you power up the device. iPhone 4S and iPad 2 are NOT supported. Also, there is currently no ETA for when an untethered jailbreak for iOS 5 will be released. If Chronic Dev-Team’s revelation at MyGreatFest and i0n1c’s recent tweets are anything to go by, iOS 5 untethered jailbreak is “covered”.