Apple has today provided developers with access to a slew of pre-release firmware updates that are in development for a number of its major platforms. Those with registered developer accounts are now able to access the third pre-release betas of watchOS 2.2 for the Apple Watch, tvOS 9.2 for the new Apple TV, and OS X 10.11.4 that installs across Apple’s iMac and MacBook computers.

These beta releases come in almost two weeks after Apple started seeding the second betas of the operating systems in question. Those looking to download the firmware files for their relevant devices can do so by heading to the Apple Developer portal as long as they are enrolled members of the Apple Developer Program. 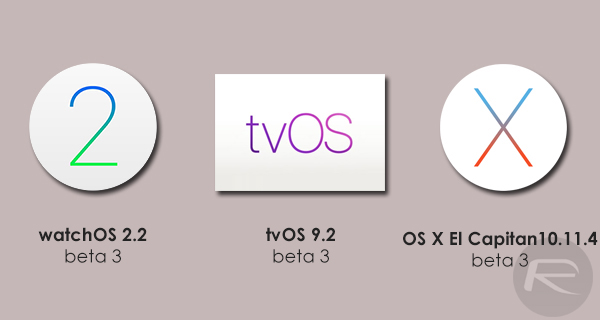 watchOS is one of the platforms that developers are eagerly taking an interest in in order to see how it develops. watchOS 2.2 has been in beta development since early January, with Apple only now releasing the third cycle of that development. As is usually the case when we reach this level of testing, there isn’t a huge amount of user-facing changes present. The previous versions of watchOS 2.2 have introduced features such as the ability to pair multiple Apple Watches with an iPhone running iOS 9.3 or above. There’s also been a number of improvements made to the visuals of the Apple Watch Maps app, including the introduction of the popular Nearby feature. Other than those inclusions, watchOS 2.2 beta 3 brings the usual improvements and bug fixes.

Developers with an Apple TV 4 can also get in on the upgrade trail. The third beta of tvOS 9.2 is now available for the company’s latest hardware release, and once again continues the improvement of the tvOS experience. Like watchOS 2.2, tvOS 9.2 has been in testing since early January and offers a significant improvement to the underlying Apple TV experience. Apple has integrated new features in tvOS 9.2 such as support for Bluetooth Keyboards, and the ability to group apps into folders like you can on iOS. Additionally, tvOS 9.2 also brings revamped app switcher and support for the company’s iCloud Photo Library feature.

This latest pre-release seed brings couple of new additions, such as the much awaited Siri dictation feature for all the text fields throughout the OS, as well as ability to ask Siri to search for apps and games in the App Store.

Finally, Apple’s slew of updates is ended with the seeding of OS X 10.11.4 beta 3. Pre-release number 3 comes two weeks after the second beta, and three weeks after the initial testing phase began early January. OS X 10.11.4 introduces support for password protected notes in the Notes app, similar to iOS 9.3 that also has a Touch ID element to it. Other than that, Apple hasn’t really made any dramatic user-facing changes with 10.11.4. The focus of OS X has long been to improve user-experience and overall stability going forward. There’s also an element of attempting to ensure that MacBook machines are as power efficient as possible through a finely tuned OS X experience.

Those interested in experiencing beta 3 of watchOS 2.2, tvOS 9.2 or OS X 10.11.4 can do so by grabbing the update from Apple’s Developer portal, or via the usual Software Update mechanism if the previous version of beta is already installed on the device.