Apple has once again found its release cycle rhythm with a slew of updates coming all in one go. Rather than spending days slowly introducing software betas to developers and testers for all of its major platforms the company has taken the opportunity to push them all out in one fell swoop. This means that registered developers and those testing Apple’s experimental releases now have access to El Capitan 10.11.4 beta 1, tvOS 9.2 beta 1, and watchOS 2.2 beta 1, all of which follow on from the pre-release version of iOS 9.3 beta 1.

It’s not unusual for Apple to flip the switch and release a beta for each platform in one go. What is unusual is for Apple to essentially run multiple beta of varying versions of a particular platform, which is exactly what has happened in this instance with iOS 9.2.1 and El Capitan 10.11.3 both still being in a pre-release state. Still, today’s releases give developers and those testing the various platforms an opportunity to see exactly what Apple has included with the latest versions, as well as the chance to focus on key areas of development and report any bugs back to Apple instantly. 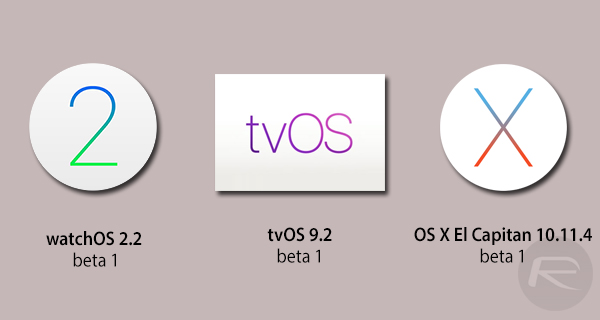 Apple’s fourth attempt at improving El Capitan currently offers unknown improvements. As is usually the case, Apple has once again neglected to push out any real in-depth and granular accompanying text that lets people know exactly what changes have been made to the platform. With that said, it’s highly likely that Tim Cook’s engineering teams responsible for the development of OS X have made significant security and performance enhancements as part of the process of pushing El Capitan forward. OS X 10.11.4 will also likely include a number of improvements and fixes for issues reported with 10.11.3, which is curiously still in a pre-release state.

Apple has also provided the first opportunity for developers to take a look at what’s new within tvOS for the Apple TV. Coming just over a month after the release of tvOS 9.1, this pre-release version focuses on improved Bluetooth support including support for a Bluetooth keyboard. There’s also the introduction of native folders for application clusters, and excellent support for Apple’s mapping framework, MapKit. This means we would soon start seeing Apple TV apps that support built-in maps. Apple has also taken the opportunity to make some changes to Siri by offering support for US Spanish and French Canadian. Finally, there’s also a new look for the app switcher as part of tvOS 9.2. A new app Apple Podcasts has also been quietly added into the mix.

watchOS 2.2 beta 1 finishes off the Apple release cycle for today. This particular release comes just a month after the public launch of watchOS 2.1 which brought with it bug fixes for the Calendar, the inclusion of Power Reserve Mode and more. watchOS 2.2 features are currently unknown in their entirety, but we do know that it now offers the ability to pair an iPhone with multiple Apple Watch units as long as the iPhone is on iOS 9.3. It’s likely that more will become known as time progresses.

All updates are available now to those with the correct privileges and can be obtained via the usual software update mechanisms for that particular platform. If you wish to grab the firmware files for the relevant OS, you can download it from the Apple Developer site provided you’re a member of the Apple Developer program.