Like all the recently released iOS beta firmwares, this one too is currently only available to Apple Developer program members but it is only a matter of time before Apple makes it available to those enrolled in the company’s Public Beta program as well. 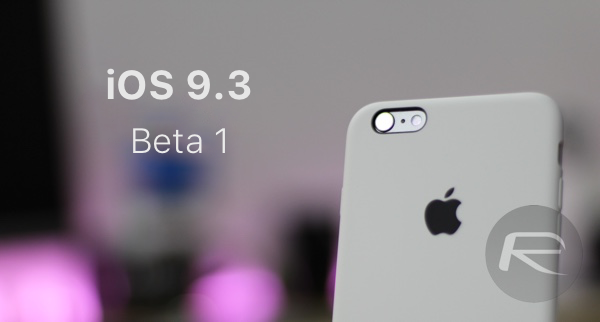 There’s currently no official changelog available for iOS 9.3 beta 1 yet but whenever there is one we’ll update the post with details on everything that is new to this release. Since this is a major point release, it is likely that 9.3 includes bug fixes, stability improvements and maybe some new features over iOS 9.2 and iOS 9.2.1 beta firmwares.

If you are already on previous beta version of iOS 9.2.1, simply head to Settings > General > Software Update on your device and upgrade to iOS 9.3 beta 1 via OTA (Over-The-Air) update mechanism.

If this is the first time you are installing a beta, you will need to download IPSW file from Member Center on Apple’s Developer website and restore to it using iTunes.

As far as the progress on jailbreak goes, Italian developer Luca Tedesco claims to have successfully jailbroken iOS 9.2.1 beta firmware. While he currently has no plans to release it, it is at least promising to know that iOS 9.2.1 and maybe even iOS 9.3 is vulnerable, and hopefully we will have a jailbreak available to public by the time the final version of iOS 9.2.1 or 9.3 is made available by Apple. We’ll obviously keep you all updated as soon as we know more on it. Stay tuned.

Update x1: Some of the new features in iOS 9.3 include:

Update x2: Check out the full list of changes in iOS 9.3 here: iOS 9.3 Features: Everything New In One Place.

Update x3: iOS 9.3 has been jailbroken already! More details on it can be found here: iOS 9.3 Jailbreak Demoed On Video