tvOS 9.2 Features: Here’s Everything That Is New [Video]

Apple’s fourth-generation Apple TV can already be classed as a success. The once internal “hobby” project has blossomed into a core focus for the Cupertino-based company, resulting in a polished hardware product with a growing App Store and underlying platform. Apple has recently released pre-release firmware update tvOS 9.2 for Apple TV 4, giving the developers a chance to not only test it out for stability and performance, but to also interact with the new features and inclusions that Apple has included. We’re going to take a look at those new additions.

The feature list isn’t as comprehensive as the one found with iOS 9.3 beta 1, but given the small period that tvOS has been around for, the evolution of the platform – especially when you consider tvOS 9.2 beta 1 – has been nothing short of impressive. 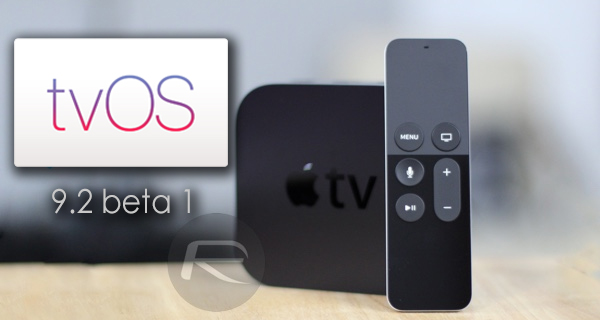 So let’s take a look at each of the new feature that the first beta of tvOS 9.2 brings to the latest Apple TV.

Folders are something that were a glaring omission from the initial introduction of tvOS. Apple’s iOS has benefitted from the ability to group installed applications into organized folders for quite some time, and now tvOS has followed that pattern. The code to enable folders within tvOS has been there from the start with Apple only seeing fit to allow groups of apps on the Home screen on this particular release.

When you start allowing third-party apps installed from an App Store onto a platform, you inadvertently introduce the issue of how to quickly switch between running and active apps. tvOS 9.2 beta 1 introduces a slightly revamped application switcher that takes a lot of inspiration from the modern iOS platform. Apple has worked hard on multitasking within iOS over the years so it makes sense that they would want to mimic the better parts of that experience.

This one is actually very important from a third-party app experience perspective. Apple has introduced its own MapKit framework into tvOS 9.2, meaning that developers can now create apps with rich mapping experiences. It’ll be interesting to see the direction that developers take with this new capability.

Siri has been getting increasingly more intelligent over time. Apple continues to update Siri with almost every update to its major platforms. tvOS 9.2 beta 1 for that matter, brings additional language support for the digital assistant. There’s U.S. Spanish for United States residents and French Canadian for those using an Apple TV in Canada. U.K. residents now get access to U.K. English, Australian, and U.S. English options.

Additionally, you may want to check out:

Bluetooth has now be extended to support the connection of Bluetooth-compatible keyboards. The Siri Remote is a fairly impressive tool for interacting with the Apple TV to accomplish certain tasks. However, as with most devices of this nature, it’s by no means a perfect way to input text. tvOS 9.2 beta 1 now allows text input via a connected Bluetooth keyboard.

Additionally, you may want to check out our guides here:

If you are one of the many individuals that regularly uses Apple’s official Podcasts app then you’ll be pleased to know that it’s now a part of tvOS 9.2. Only time will tell if it makes it into the final public release, but certainly from a beta perspective it’s in there.

There may not actually be anything entirely revolutionary in there, but it clearly shows that Apple has taken feedback onboard, and is attempting to give consumers and developers what they need. The platform has a long way to go, but tvOS 9.2 shows that Apple is serious about getting there.