The advantages of rooting an Android device – as well as some of the drawbacks – have been well documented in many a post here at Redmond Pie. But if you have decided to enter the Dark Side, as it were, you’ll be more than aware that both management and all-in-one tools can be invaluable in terms of getting the most from your hacking and modding endeavors.

Gapps Manager, a new utility for you rooted folk of Android, helps you recover the specific versions of Google Apps tailored to your device – something you mightn’t have since the installation of new ROMs can often remove them.

Finding the Google Apps and installing them isn’t particularly cumbersome, so why the need for the app, I hear you cry. Well, the major plus point of this particular tool is the fact that it will ensure you get the right packages for your configuration and setup. All you need to do, once you open up Gapps Manager for the first time, is select your OS version, and the app will work its magic in getting hold of anything from Gmail and Play Music to Search and the Play Store.

To some the idea of rooting a device and messing around with the Android software’s innards would seem a pretty daunting task. But thanks to the wealth of resources out there, it’s actually both a learning curve and enjoyable, as I have learned during the course of the past year with my beloved HTC One.

So, if you happen to be rooted and require a convenient, easy-to-operate utility for the restoration of your Google Apps, then be sure to check out Gapps Manager via the Play Store link provided below. 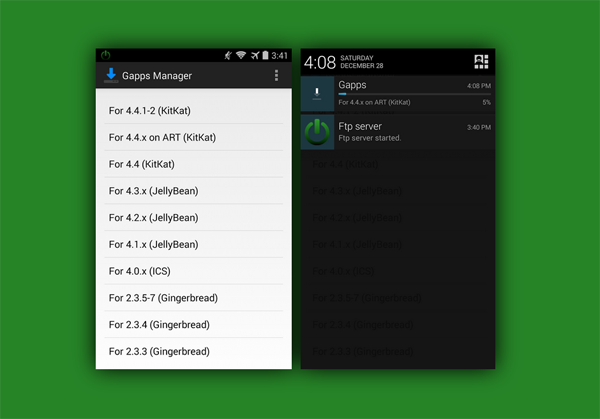 It’s absolutely free of charge, and as we’ve come to expect of such an accomplished, well-polished app, it originates from the XDA-Developers forums. As such, if you encounter any issues or simply wish to offer some feedback, be sure to head over to the original thread over on XDA, which is also linked to below.

Be sure to let us know in the comments section below if this was useful.

(Download: Gapps Manager for Android on the Play Store) (via: XDA-Developers)