Apple To Launch iPhone 5 At WWDC This June, Says Analyst

Apple decided, that in 2011, it would break the regular launch pattern for the iPhone and deviate from the traditional June unveiling. The company took to the stage in October instead during the "Let’s talk iPhone" event to announce the details and release date for the current iPhone 4S. Even though the 4S has only been with us for just over three months, people are starting to speculate and anticipate when we will see the announcement of the iPhone 5.

The good news for some is that we may not need to wait a full twelve months as it looks as though the next generation iPhone will be put back onto the traditional schedule and will be announced in June of this year during the Worldwide Developers Conference in San Francisco. Speculation comes from Daiwa Securities who believe that the company will revert back to the WWDC; unveiling for the sixth generation iPhone. The iPhone 3G, 3GS and the iPhone 4 were all unveiled during a WWDC keynote.

Daiwa also claim that the new iPhone 5 will make use of glass to glass touch panel technology which will likely be supplied by TPK Holding and Wintek, although this obviously has not been confirmed. The October launch of the iPhone 4S was surprising to some, but the possibility of Apple going back to a June launch date does not come as a shock if it is true. The exact dates for the Worldwide Developer Conference this year are yet to be announced by Apple but a leaked calendar from the Moscone Center points to a date between June 10 and June 15 which has a corporate meeting scheduled in.

The "Corporate Meeting" placeholder is generally what the company has used in the past to identify a WWDC event, so the chances are high that the calendar entry could hold merit. If Apple does launch the sixth generation iPhone in June, I can certainly see a number of consumers being rather unhappy considering it would only have been eight months since the last release, taking away the opportunity away from them from upgrading to a newer device. I know from a personal point of view that I like the releases to be in twelve month intervals for that reason, but, the October 2011 launch forced me to buy a SIM-free iPhone 4S. 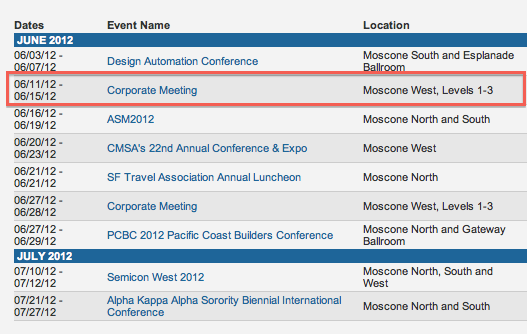